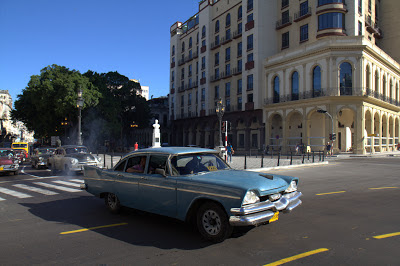 This was the scene one morning across the street from the posh Hotel Parque Central in Havana. The hotel's current special: $190 per night for a standard room or $243 for a suite. Of course, you have to stay five nights to get that price.
But if you are an American traveling legally to Cuba, you can't stay at the Parque Central at all unless you manage to snag a rate of no more than $90 per night.
That's because the U.S. government sets spending limits for legal American travelers to Cuba.
The State Department's maximum hotel rates are below (see current per diem rates, including lodging, meals and other expenses, here): 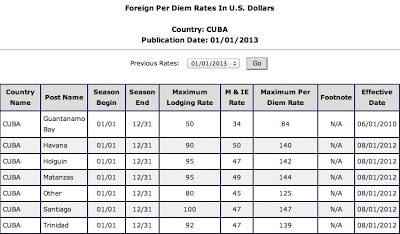 Cuban-Americans can travel to the island freely and stay wherever they want, but not Americans. I know our government doesn't want us to infuse the "evil" Castro government with cash that can be used to oppress its citizens and prolong its stay in power. But, strictly speaking, aren't Cuban-Americans doing that?
I realize there's a difference between going to Cuba to visit your family and going there as a tourist, but our policy is both contradictory and schizophrenic. It panders to Cuban-Americans and the anti-Castro lobby. It discriminates against American travelers. And it doesn't - as far as I can tell - boost basic freedoms in Cuba. There's got to be a better way.
Posted by alongthemalecon at 6:57:00 AM

Tracy, Does USA have this spending limitations for Americans who travel to any other country???

I feel is too strict for the USA gov to decide how much you spent on your hotel night, however I think that the Hotel Parque Central nightly rates are too high, especially for a country that the medium income is $20 a month, obviously no Cuban can afford those hotels rates, those rates are for foreigners with hard currency or CUC. But on the other hand, what makes sense between USA and Cuba???
I tell you my side of the story, for Cuban-Americans its much much expensive to travel to Cuba, starting with a very expensive passport to entry your own country of origin, all types of bureaucratic paperwork, the expensive overcharge for extra luggage paid to the Cuban gov authorities ( Cuba only allows 40 pounds per person), and the list can continue. Many Cubans go there to see their families and to help them survive another month, maybe one more year.. They return with empty pockets and literately empty suits cases… they also leave their hearts and their hopes in a country that is just too unjust, too intolerant, too selfish. I would just said that the Cuba gov’s job it’s to squeeze every penny from Cubanos living in USA.

Marite - U.S. government employees and contractors must abide by per diem spending limits. I don't know that ordinary travelers have to stick to spending limits in any other countries besides Cuba. I haven't really investigated that angle.
The Parque Central is too rich for my blood, but I like going there to meet interviewees and use the Internet (there's wireless in the lobby and first-floor restaurant).
It is a shame that U.S.-Cuba relations are so strained. I know a lot of families that are fed up with Cold War politics and just want to see each other like most other people in the world.

Yes, I know, We are mostly fed up with abusive dictatorship gov for 54yrs. Thanks
Regards

Tracey, brokering democracy through the application of peaceful albeit uneven pressure is bound to be full of contradictions. A new study shows that non-Cuban-american and Cuban-american tourists to Cuba are trending toward becoming the largest group of visitors to Cuba surpassing even the Canadians. The economic impact of Americans on the island is significant even with these travel restrictions. To allow Americans who legally travel to Cuba coupled with those who travel through third countries to spend freely would surely begin to reinvigorate a Cuban economy currently operating on fumes. Doing so would only serve to delay the inevitable need to completely restructure the Cuban economic system.

Moses, I understand that argument. And you're right about the inevitable contradictions. But I see little imagination in the U.S. approach, a lack of willingness to be daring, to try something new, which to me is a sad commentary considering that the U.S. is the more powerful of the two nations. With that power should come some grace, some humility, some willingness to bend. Instead, we have a policy of intolerance, of school-yard bullying, and I wonder if there is another way.

Tracey, your remarks betray your understandably emotional desire to see relations improve between the US and Cuba. Moreover, you imply that between the two rivals, the US should be the one who makes at least the initial if not the greater effort toward reconciliation. I, too, have an emotional stake in this. I simply feel that Cuba, having much more to gain, should make the initial AND greater effort. US stubbornness, is not a result of being a schoolyard bully. It is because the US has the greater responsibilty to ensure that ultimately there is more not less democracy in Cuba. Rewarding political reforms in Cuba with the promise of improved relations with the US is a better, if not more imaginative, strategy than just being nicer to Cuba and hoping for the best.

I respect your views, Moses. The wide diversity of opinion on this issue is one of the things that makes it interesting.

Congratulations, Tracey, on your fine work! Keep up the research, so all of the CIA agents in Cuba posing as "independent" journalists and "bloggers" will be rounded up. By focusing on U.S. "humanitarian aid" to these agents, the world will wisely ignore all claims that "free" internet does not exist in the First Free Territory of the Americas! You deserve a medal, to be *personally* presented by the Five Heroes!

Did you complain when the travel bans were against Apartheid South Africa? The UN General Assembly adopted the International Convention against Apartheid in Sports in 1985. Have they done any such thing about Cuba to this day? Please. Universities were vocal in the campaign against apartheid and boycotted institutions in South Africa, refusing to travel there or invite the country’s scholars to the US, Canada or the UK. Were you complaining that it was unfair? Has ANY university come out like this over Castro's 55 year rule? Be honest, you HATE Cuban Americans. Please, it is beyond obvious.

USAHAVANA - I certainly don't hate Cuban-Americans, but I do think that our policy is discriminatory. I respect your right to view things differently, of course.