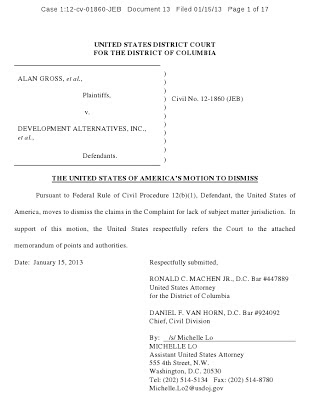 The U.S. government today declared itself immune from the $60 million lawsuit filed in November by American development worker Alan Gross and his wife Judy in connection with his 2009 jailing in Cuba.
Assistant U.S. Attorney Michelle Lo wrote (download 17-page motion to dismiss):


Since Mr. Gross’s detention, the United States has been and remains steadfastly committed to securing his immediate release from his imprisonment by the Cuban authorities.
The United States Government sympathizes deeply with the Plaintiffs, Alan and Judith Gross, for their ordeal at the hands of the Cuban government. It continues to use every appropriate diplomatic channel to press for Cuba to release Mr. Gross unconditionally and allow him to return home to his family.
Nevertheless, this Court lacks subject matter jurisdiction to hear the claims brought against the United States by Plaintiffs arising from Mr. Gross’s detention in Cuba.

To be sure, suing the federal government - and winning - is an uphill fight. Sovereign immunity protects the government from most lawsuits. But the U.S. government waives immunity in cases covered by the 1946 Federal Tort Claims Act, or FTCA.

Under the FTCA, plaintiffs can sue Uncle Sam for “the negligent or wrongful act or omission of any employee of the Government while acting within the scope of his office or employment, under circumstances where the United States, if a private person, would be liable to the claimant in accordance with the law of the place where the act or omission occurred.”
Lawyers for the Gross family say the FTCA applies in their claim against the U.S. Agency for International Development and Development Alternatives Inc., the Maryland contractor that hired Gross to set up Internet connections in Cuba in violation of the socialist government's laws.
In a document filed today, Lo argued that FTCA doesn't apply because any harm or injury that Gross suffered took place in a foreign country. She wrote:


As the allegations in the Complaint make plain, the claims of negligence and negligent infliction of emotional distress brought by Alan Gross and the claim of loss of consortium brought by Alan and Judith Gross against the United States are all based on or derivative of injuries that Mr. Gross has suffered in Cuba, a foreign country. Consequently, for the reasons explained more fully below, the foreign country exception to the Federal Tort Claims Act (“FTCA”), 28 U.S.C. §§ 1346(b)(1), 2671-2680, immunizes the United States from suit for the allegedly tortious acts.
As the Court is without jurisdiction to hear Plaintiffs’ claims against the United States, the United States should be dismissed from this action.