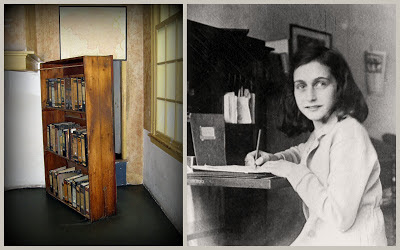 The world's most famous "secret annex" is tucked behind a bookcase where 13-year-old Anne Frank hid out during the Nazi occupation.
Lesser known is the secret annex to a report describing the U.S. government's Cuba strategy in the post-Castro era.

The Commission for Assistance to a Free Cuba issued the 93-page report to President George W. Bush in July 2006. Wayne Smith, the former top U.S. diplomat in Havana, wrote at the time:


...the report carries an annex which it is said must remain secret for “reasons of national security” and to maximize its chances of success. We can only guess what is in the annex. Given the history of U.S.-Cuban relations, however, there will inevitably be speculation that it contains new assassination plots against Castro (although this time against Raul) and new plans for exile raids if not direct U.S. military action.

Six and a half years later, parts of the secret annex remain classified, although much of the document has been released through the efforts of Jeremy Bigwood, a researcher and journalist in Washington, D.C.
Bigwood used the Freedom of Information Act, or FOIA, to obtain several versions of the 26-page document (see redacted version here and less censored version here).
Parts of the annex that were most recently declassified may provide a window into the thinking on Cuba that led to the 2009 effort to establish a network of satellite Internet connections on the island. The document also reveals concern that Cuba and Venezuela were working together to advance an anti-American agenda elsewhere in Latin America. And it cites the need to "control the policy environment" and promote the idea that "there is an opportunity for transition if we act today."
Below are portions of the secret annex that were redacted in one version of the document, then later declassified. (Download PDF showing side-by-side examples of the redactions). Officials evidently thought these were sensitive portions of the document.


At the same time, there are clear signs the regime is using money provided by the Chavez government in Venezuela to reactivate its [redacted] networks in the hemisphere to subvert democratic governments.
The U.S. Government should take advantage of advances in satellite Internet technology to provide the greatest possible access to the Internet, without regime censorship, to the broadest segment of the Cuban people. Independent libraries and other civic groups could be one focal point for providing such access to the Cuban people. 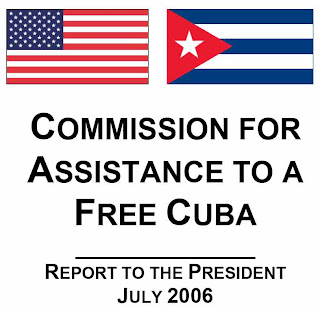 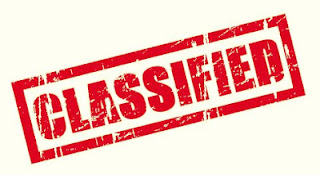 Portions of the secret annex remain classified. They include information on:
Many of the commission's recommendations also remain secret, including steps it suggested that U.S. authorities take "in response to Cuba's repeated and consistent efforts to impede safe, legal, and orderly migration."
Bush created the commission in October 2003. He said he was preparing for "the happy day when Castro's regime is no more..."
Roger Noriega, then-assistant secretary of state, summed up the administration's view:


The United States.....will not accept a succession scenario.

Then-Secretary of State Colin Powell was first chair of the commission. He issued the group's first report in May 2004. The 456-page tome showed American officials were planning Cuba's future down to the last detail.
For instance, the report said, if Cuba's transitional government requested help, the U.S. government was prepared to:
Such meticulous planning did not hasten the collapse of the socialist government and the commission issued the follow-up report, with secret annex, in 2006.
Then-Secretary of State Condoleezza Rice had taken over as chair. She and other commission members were particularly troubled by Cuba's relationship with Venezuela. Their report stated:


Cuba's ever-deepening relationship with Venezuela parallels the earlier failed relationship with the Soviet Union, only this time not as the junior partner: Fidel Castro is calling the shots. This Castro-led axis must be understood as part of the regime's succession strategy and an effort to insulate Cuba from pressure for democratic change.

This axis also undermines out interest in a more democratic Venezuela and undermines democratic governance and institutions elsewhere in the region. Together, these countries are advancing an alternative retrograde and an anti-American agenda for the hemisphere's future and they are finding some resonance with populist governments and disenfranchised populations in the region.

The report emphasized that the U.S. government would step in only if Cuba's transitional government asked for help. It stated:


Cubans need to know there is hope in freedom. Accordingly, we cannot falter or fail to support the Cuban people as they approach the opportunity for real change. When the time comes, the generosity Americans have always extended to Cubans will surely be redoubled.

...the Commission's fundamental premise is that Cubans themselves will define their own destiny. Only Cubans can chart a path to liberty, prosperity, and reconciliation. It is they who will ensure that the dictatorship which advocated nuclear war against our nation will end.

There should be no misunderstanding: the Cuban dictatorship today is a destabilizing force in the region; a demonstrated threat to our citizens and their own; and has proven willing to manipulate for its own self-serving purposes humanitarian U.S. immigration policies and the desire of the Cuban people for freedom.

Note: This article was shared with the Center for Democracy in the Americas as part of a six-month collaborative project with non-profit group. See more about our collaboration here.
Posted by alongthemalecon at 6:12:00 PM