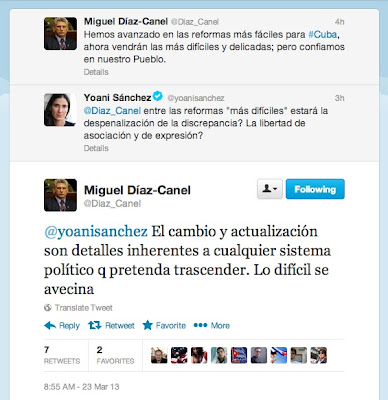 Here we go - Cuban Vice President Miguel Díaz-Canel joined Twitter and in less than 24 hours he and Yoani Sánchez struck up a conversation.
Update: Diario de Cuba reported later that it appears the Twitter account is a fake.
The pro-government El Blog de Yohandry published a photo of Díaz-Canel with other government supporters and the statement:


Well, I have to announce to my fans that @Diaz_Canel is a fake account. I encourage friends to report this spam.

Whoever is running the account denied it was a hoax, saying:


My Twitter account is authentic. We'll be talking about social networks on the Mesa Redonda (Round Table) on Monday the 25th.

Okay,I don't know what you think but it sounds like Diaz-Canel just said "yes, in time we will have freedom of assembly and expression".

The problem is that in order to deny the interpretation that I and many others took from the response, it is well within the realm of possibility that the 'Thought Police' in Cuba would overrule Diaz-Canel and deny the authenticity of the account. Remember when Raul said in 2009 that he "was willing to meet Obama anywhere under any condition to negociate"? A day later Fidel's people said what Raul meant to say was that he was "available to negociate". Maybe Diaz-Canel said what he meant, and now won't be allowed to mean what he said?

It would be a shame if this is Diaz-Canel reaching out only to have higher-ups nix his efforts.


The purported statement is a simplified rendition of something he said inpublic which was more nuanced and complex.

I am sure that the US government has taken Tracey Eaton and his readers for a ride.