Yoani Sánchez: "Difficult times are ahead for Cuba"


Technology didn’t just change the life of this little person here with you now. Technology is changing people’s lives.

Sánchez left the island in February and is on an 80-day swing through Europe and the Americas. She traveled this morning to Washington, D.C., where she plans to meet with lawmakers.
"I'm not going to ask for anything," Sánchez said in New York before reaching the nation's capital. "Change in Cuba must come from inside Cuba."
Cuban writer and artist Coco Fusco said Sánchez "spearheads the most significant cultural and political movement to emerge in Cuba in the past decade." 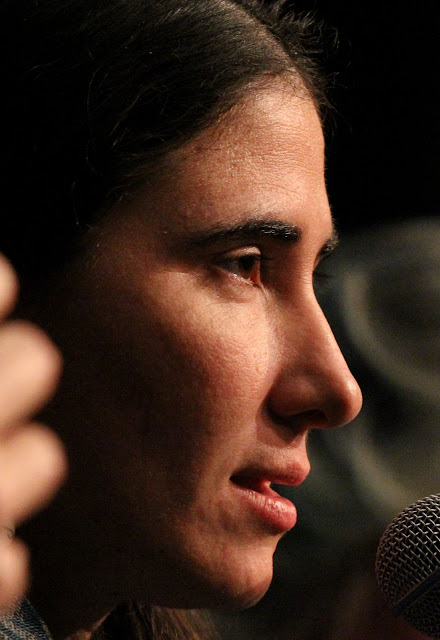 Supporters of the Cuban government repeatedly accuse Sánchez of somehow being an invention of the U.S. government, an accusation she denies.
Asked what motivates her in the face of such criticism, Sánchez told Along the Malecón in an interview:


I am very stubborn. Ever since I was a little girl I have been stubborn. If I wanted to do something, I followed through to the end. 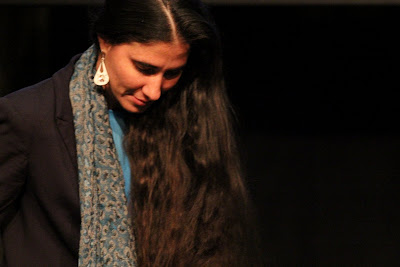 Sánchez began her blog, Generación Y, in 2007. Since then, some 50 opposition bloggers have joined her on the DesdeCuba website. She said:


Having a blog in Cuba is the easiest way to get into trouble.

But she has no plans to stop now, saying:


There’s no return to silence. 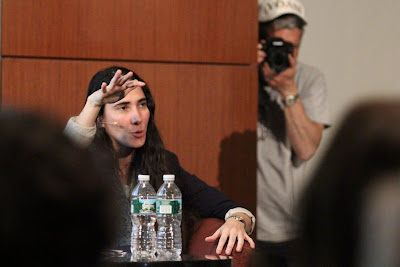 Sánchez told an audience in New York that she came to the U.S. is "weave bridges not with cloth, but with megabytes."
Already, many Cubans communicate via Twitter even though they don't have Internet connections. Sánchez said:


I calculate that 120,000 people use Twitter from their mobile phones not connected to the Internet to send messages from the island to the world.

Some Cubans learn about happenings in their own neighborhood thanks to news and information that is sent out via Twitter, later to return to the island "like a boomerang," Sánchez said. 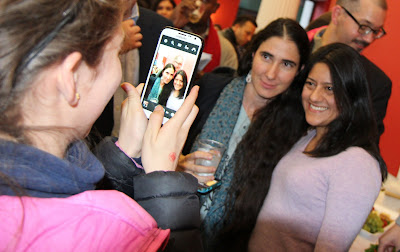 She urged her supporters to take flash drives, used laptops and other equipment to Cuba if they visit and said:


Let’s work together, with technology as an ally, for a better Cuba.

Luis Miguel Rosales, a blogger who supports the Cuban government, contends that secret "Yankee masters" are financing Sanchez's world tour, which he describes as "a real circus."
Anti-Castro activists scoff at such thoughts and say they expect Sánchez will be applauded in Washington and in Miami, where she plans appearances in early April.
Alberto de la Cruz, managing editor of the popular Babalú blog in South Florida, said:


I believe Yoani will receive a warm welcome in both Washington and Miami. Outside of the mob the Cuban Interests Section in Washington D.C. will no doubt organize to carry out an act of repudiation on her when she arrives, I believe she will be very well received in our nation’s Capitol. And in regards to the rumors of protests against her in Miami by Cuban exiles, it seems to me they are overblown or exaggerated. I believe everyone will be surprised by how well Yoani will be received in South Florida.

Asked if he had any general reactions to Sánchez's trip abroad, de la Cruz said:


So far, Yoani’s tour has gone pretty much as I expected. The rocky start in Brazil with her less than eloquent answer to the Cuban 5 question notwithstanding, Yoani has expressed her views on other issues regarding Cuba as effectively as she has done in the past. Considering the Castro dictatorship’s extensive intelligence network, it is no surprise she has had pro-Castro mobs waiting for her at every stop, including New York City, to carry out acts of repudiation. I will say her calm and witty responses to them so far have been noteworthy and impressive.

Will the blogger's travels influence social and political change in Cuba?:


I would like to believe Yoani’s world tour will help raise awareness of the human rights violations taking place in Cuba and that will force some type of social and political change on the island. We will have to wait and see what happens. But I do believe the work she is doing – along with the impressive work of Rosa Maria Paya and Berta Soler in Europe – is effectively moving the public conversation on Cuba in the right direction. Between all of them, we may very well see some positive effects on the island, if not in the short term, perhaps in the mid or long term.

While in New York, Sánchez answered dozens of questions during appearances at Columbia Journalism School, New York University and the New School.
She said she stopped believing in the Cuban revolution years ago.


I think I always realized I didn’t live in a revolution. I decided as a teen-ager that everything was a lie.

Some Cuban government supporters counter that Sanchez and other opposition figures don’t appreciate the education and health care they've received in Cuba.
Sanchez replied, “Why should we have to be silent to have that?”

She also criticized those who promote a “theme park” view of Cuba, with 1950s-era American cars and a poor, but happy populace. That hurts the democracy movement, she said.
Sánchez said opposing the Cuban government is difficult work. She said state security agents are sophisticated and use many methods, including near-constant surveillance, to try to control and monitor dissidents, bloggers and independent journalists.
She believes agents sometimes use geolocation equipment to find her mobile phone and track her movements.
Cuban officials portray themselves as David in a fight against Goliath - the U.S. government. But the reality, she said, is that ordinary Cubans are like David when challenging their all-powerful Cuban government. 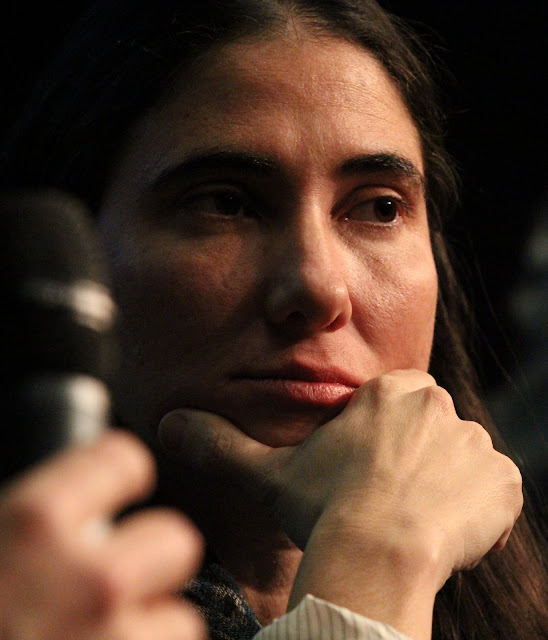 Sánchez said in the interview that she hopes to start an independent digital newspaper in Cuba later this year.

Asked where she sees herself in five years, Sánchez said:


I see myself in a room, at a table, debating with a lot of energy and many arguments what news to put in the newspapers, or what photo to use on the cover. That's how I see myself.

As for Cuba, she said:


Difficult times are ahead for Cuba. 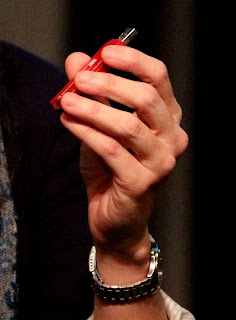 But some things will have changed in five years, she said. Cuba's revolutionary leaders - including Raúl Castro and his brother Fidel - will be older or no longer on the scene.


I don't think, really, that the government that's in power can maintain control of Cuba in the way that it does now.

And though there may be tumultuous times ahead, she said:


I think it will be a better Cuba.