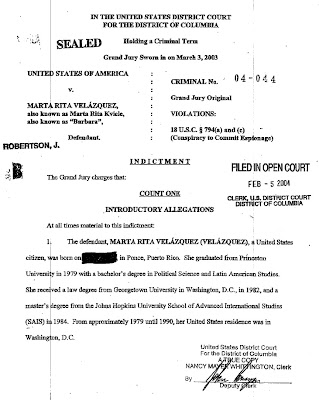 The U.S. government's case against Marta Rita Velázquez is a tale of intrigue and clandestine travel, false passports and secret meetings.
Prosecutors say Velázquez introduced Ana Belén Montes to Cuban agents in 1984 and later helped Montes land a job with the U.S. Defense Intelligence Agency.
Montes went on to become one of the most damaging spies in U.S. history, authorities say. She was arrested in 2001, convicted in 2002 and sent to prison.
In 2003, a grand jury charged Velázquez with one count of conspiracy to commit espionage. The indictment was filed on Feb. 5, 2004, but remained under court seal until Thursday. It's unclear why U.S. authorities unsealed it now, more than nine years after the indictment.
Velázquez is thought to be living in Stockholm, Sweden. I called what I believe to be her mobile phone number. I heard a message in a language I do not understand, and left a message.
A Swedish reporter also called Velázquez's number and said that a woman answered, irritated, and said, "What? Who is it? Oh, OK," and then hung up.
The Swedish TT news agency reported that Velázquez is now a Swedish citizen.
The Washington Post reported that U.S. authorities in December 2011 told Velázquez "she was under suspicion."
The U.S. extradition treaty with Sweden does not include espionage in crimes requiring extradition. See treaty. (H/T Phil Peters).
The Local, an English-language newspaper in Sweden, reported Friday that Velázquez's husband was an official in Sweden's Ministry of Foreign Affairs. The paper did not name the husband, but said:


The acts of espionage were carried out while the two were married.
Sweden's Ministry of Foreign Affairs spokeswoman Charlotta Ozaki Macías confirmed that the ministry had been aware of the case for years.
"The Foreign Ministry official with a connection to the case is not guilty of criminal activity," she told the TT news agency.
The Swedish man remains in service at the ministry.
Sweden has not received any requests to extradite the woman to the US, according to Per Claréus, press secretary to Justice Minister Beatrice Ask.
He told TT that if the US was to send an extradition request, it would be refused.

The indictment (H/T Capitol Hill Cubans) alleges that Velázquez carried out the following overt acts:
FBI agents arrested Montes on Sept. 21, 2001.  (See FBI affidavit explaining case against her). She pleaded guilty to conspiracy to commit espionage and is now serving a prison term at the Federal Medical Center, Carswell, a Texas facility that provides specialized medical and mental health services to female inmates. Her scheduled release date is July 1, 2023.
Velázquez, like Montes, is from Puerto Rico. She was born in the town of Ponce and grew up in the United States. Her degrees include:

The Daily Princetonian reported that Velázquez helped organize the Third World Center Cultural Festival at the school. The Dec. 13, 1976, issue of the Princetonian quoted her as saying:


We are all part of oppressed nationalities throughout the world. Here at the university, which is very conservative and white-male-oriented, if we can put together a performance as successful as this one was, it's almost unbelievable.


From at least in or about 1983 and continuing until the present, within the District of Columbia and elsewhere, the defendant, Marta Rita Velázquez, also known as Marta Rita Kviele, also known as "Barbara", unlawfully combined, conspired, confederated, and agreed together with persons known and unknown to the Grand Jury, to communicate, deliver and transmit, directly and indirectly, to the government of the Republic of Cuba and to representatives, officers, agents and employees thereof, documents, writings, and information relating to the national defense, with the intent and reason to believe that they would be used to the injury of the United States and to the advantage of the Republic of Cuba, in violation of Title 18, United States Code, Section 794(a).

The indictment also gives background information about the Cuban Intelligence Service and explains the accusations against Montes. It states:


The Cuban Intelligence Service has long had an aggressive program aimed at spotting and assessing persons within the United States academic community who may be suitable for recruitment to serve a variety of roles on behalf of Cuba's interests. The most important role is that of agent - that is, a person who is not an employee of a hostile intelligence service (such as the Cuban Intelligence Service) but who is aware that he or she is working for that service and who is willing to engage in clandestine operational activity, including intelligence gathering, for that service.

The Cuban Mission to the United Nations in New York City, and the Cuban Interests Section in Washington, D.C., are the principal establishments to which Cuban government officials having diplomatic immunity - including Cuban Intelligence Service officers - are assigned in the United States.


The Cuban Intelligence Service often communicates clandestinely with its officers and agents operating outside Cuba by broadcasting encrypted radio messages at certain high frequencies; such clandestine communications were used by Ana Belén Montes and by some of the defendants convicted in June 2001 in the Southern District of Florida, in the case of United States v. Gerardo Hernandez, et al., 98-721-CR-Lenard, of committing espionage on behalf of Cuba and acting as unregistered agents of Cuba. 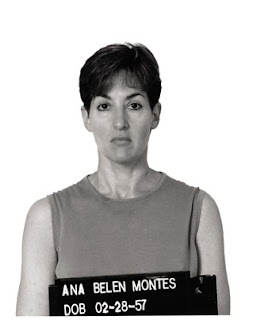 On April 18, the Washington Post published a fascinating story about Montes. Jim Popkin, a former NBC News reporter and senior investigative producer, wrote the piece. It was entitled, "Ana Montes did much harm spying for Cuba. Chances are, you haven’t heard of her." The story said:


Like Aldrich Ames and Robert Hanssen before her, Ana Montes blindsided the intelligence community with brazen acts of treason. By day, she was a buttoned-down GS-14 in a Defense Intelligence Agency cubicle. By night, she was on the clock for Fidel Castro, listening to coded messages over shortwave radio, passing encrypted files to handlers in crowded restaurants and slipping undetected into Cuba wearing a wig and clutching a phony passport.
Montes spied for 17 years, patiently, methodically. She passed along so many secrets about her colleagues — and the advanced eavesdropping platforms that American spooks had covertly installed in Cuba — that intelligence experts consider her among the most harmful spies in recent memory.

Wow, what a story!

yeah, it's something else, isn't it?