The State Department paid the Institute for Democracy in Eastern Europe more than $2 million to promote democracy in Cuba from 2007 to 2011, but refuses to give full details of the group's work on the island.
The non-profit IDEE has carried out democracy programs in Cuba on and off for nearly 20 years. On Oct. 8, 2011, I filed a Freedom of Information Act, or FOIA, request for information about one of those programs, entitled "Democracy in Cuba."
The State Department said it found 15 documents related to my request. It released all or part of 14 documents and withheld one document entirely.
Most of the documents are routine contract forms and letters and give little information about the Cuba program. One of the few documents with any details is heavily redacted. (See 10-page contract proposal). The State Department refused to release information on:
The State Department withheld such details citing FOIA's Exemption 4, which protects "trade secrets and confidential business information."
The Institute for Democracy is more forthcoming than the State Department and offers details of its Cuba work on its website. That makes me wonder whether all the government secrecy is necessary.

The Sunlight Foundation has protested the U.S. government's routine portrayal of federal contracts as "proprietary." The foundation calls on greater transparency, stating:


...Our newly networked citizenry has rising expectations of greatly expanded access to governmental information, so that it may play a fuller role in understanding, evaluating and participating in the workings of its government.

More open and transparent government can foster more competent and trustworthy behavior by public officials along with a more engaged public. 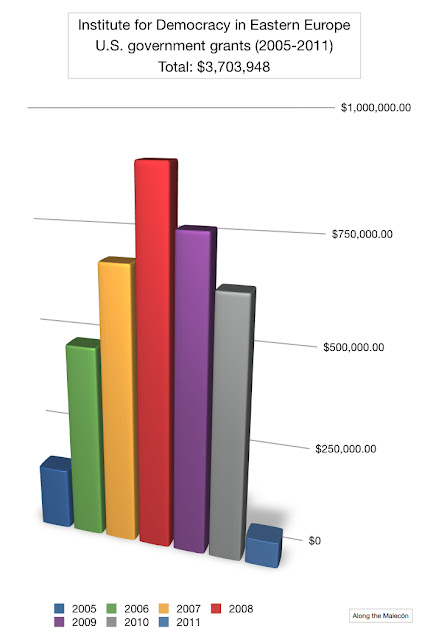 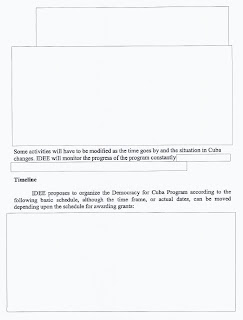 
As much as $200,000 may overlap in the reported figures. Even so, the numbers show that the institute received at least $2,074,473 for Cuba programs from late 2006 to late 2011.
Taxpayers can't rely on the State Department for full details on how that money was spent. The institute is more forthcoming, at least in describing the program it ran from 2005 to 2007. From the organization's website:

IDEE received a grant for a “Democratization and Human Rights” in Cuba program, also funded by the Democracy and Human Rights Bureau of the State Department, allowing IDEE to resume its work in support of the peaceful democratic opposition. Cuba is sui generis — the only member of the Soviet bloc that failed to change and that maintains a full communist dictatorship. In place now almost fifty years, it has lasted longer than the communist dictatorships in Central and Eastern Europe. Thus, Cuban democratic activists confront one of the most oppressive regimes in the world in conditions of severe economic deprivation and decline. Despite speculations about quick changes in Cuba following the severe illness of Fidel Castro, democratic activists little evidence of reform and instead continue to experience a high level of repression, intimidation, and harassment.

IDEE’s aims through this program were to help break through the regime’s information blockade, establish strong contacts between democrats in Cuba and Eastern Europe, positively influence the strategy of the Cuba democracy movement with Eastern European lessons, and foster pro-democracy activism among Cuban youth and others in Cuba’s growing civil society. It has drawn upon its Centers for Pluralism Network and other resources to achieve these aims,

From May 2005 to March 2007, IDEE:
IDEE’s activities have provided a small opening for democratic activists in Cuba to increase their contacts and knowledge with Eastern Europeans, whom they see as their natural counterparts in their struggle for freedom. IDEE’s hope is that these activities can benefit the Cuban opposition as it confronts new challenges. The above activities have received a continuation grant, which also includes a special focus on supporting women’s and women’s led civic organizations in Cuba.


The institute's co-directors are Irena Lasota and Eric Chenoweth. She was a leading opposition activist in Poland in the 1960s. He was an active supporter of the Solidarity Movement in Poland.

Note: This article was shared with the Center for Democracy in the Americas as part of a six-month collaborative project with non-profit group. See more about our collaboration here.
Posted by alongthemalecon at 3:43:00 PM

Tracey, as an American taxpayer (particularly relevant to say that today), I am less troubled by the high degree of redaction in these and other documents and more troubled by the lack of accountability with regards to measurable results. I understand that the details regarding how money is spent and who is doing the spending may be sensitive and not in the best interests of the overall program goals. However, like former Sen., now Sec'ty of State Kerry, I am concerned that there are no measurable results from these expenditures. If anything, Cuba is less democratic and while the space for expressing democratic ideas seems to have increased, the regime appears to be doubling-doubling down on its anti-democracy actions. You have done a yeoman's job in bringing these expenditures to light. Castro apologists delight in your labors to support their accusations that the US continues to work at regime change in Cuba. What they fail to acknowledge is that given the relatively low amount of money expended, regime change in Cuba is clearly a lowest priority for this administration. In comparison to what the US spends in rooting out Al Qaeda or countering Chinese cyberespionage, Cuban regime change expenditures are rounding numbers. Still, given the results, even at these levels, we are probably spending too much.

Good point about the lack of information about measurable results, Moses. U.S. officials have told me they have had successes, but can't talk about them because that might endanger aid recipients or otherwise compromise the programs.

No, the secrecy is designed to prevent the people of the United States and the rest of the world from finding out exactly where the money is going.

Tracey's yeoman labors are much appreciated, precisely because he's trying to bring these secretive programs out into the open.

Imagine if Cuba tried to overthrow the United States government? Wouldn't people here want to know what the details are?

Moses complains about the lack of results, which he's not able to evaluate since the details are kept secret. This only means he thinks MORE US funding should be spent in more efforts to overthrow the Cuban government.