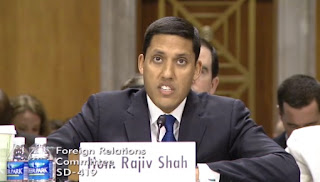 The U.S. Agency for International is asking for a budget of $20.4 billion for fiscal 2014, which begins on Oct. 1, 2013. That's 6 percent below what the agency spent in fiscal 2012.
USAID Administrator Rajiv Shah on Wednesday told the Senate Foreign Relations Committee:


In this tough budget environment, USAID is committed to maximizing the value of every dollar. We have made tough choices so that we are working where we will have greatest impact, and shifting personnel and funding resources towards programs that will achieve the most meaningful results.
Across the world, we are strengthening democracy, human rights, and governance, with a special emphasis on marginalized populations, including women and youth. Support for democratic and economic transitions enables the rise of capable new players who can help solve regional challenges and advance U.S. national security.
Since January 2011, the State Department and USAID have allocated more than $1.8 billion to support democratic transitions in the Middle East and North Africa and respond to emerging crisis needs in the region.

Note: This article was shared with the Center for Democracy in the Americas as part of a six-month collaborative project with non-profit group. See more about our collaboration here.
Posted by alongthemalecon at 1:00:00 PM