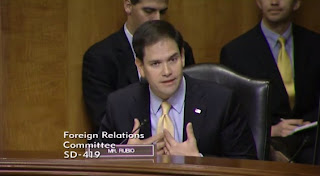 The U.S. Agency for International Development plans to cut its budget for democracy programs in Cuba by 25 percent.
Sen. Marco Rubio on Wednesday called it "a terrible precedent, a terrible idea" and urged the agency to reconsider.
The planned reduction* is "way out of proportion...for a program of this small scale," said Rubio, speaking Wednesday at a Senate Foreign Relations Committee hearing in Washington, D.C. (See video).
Rubio blamed Secretary of State John Kerry for the cut. He did not mention Kerry by name, but recalled that Kerry, as senator and chair of the Foreign Relations Committee, once froze funding for democracy programs in Cuba.
Rubio said Kerry and other lawmakers "held up this program with endless questions about it."
Kerry now oversees both the State Department and USAID and is in a position to adjust the budget for the democracy programs. Said Rubio:

Rubio also urged that USAID's Cuba money be spent on democracy promotion, "not the creation of grassroots community organizations that specialize in, you know, better sewage treatment programs or what have you. This is about democracy."
Rubio is a member of the Foreign Relations Committee, which heard testimony from USAID Administrator Rajiv Shah.
Shah told Rubio:


On Cuba, your point is well taken.

Sen. Bob Menéndez, who chairs the committee, said he didn't agree with "the totality of cuts" to USAID's budget proposed for fiscal 2014.
Menéndez said the agency was cutting its Cuba program at a time when arrests of dissidents and activists are rising on the island. He cited attacks on members of Ladies in White and the "assassination" of dissident leader Oswaldo Payá. He said:

Ménendez also complained that the U.S. government doesn't react until there's a major problem in a region and then "we'll spend a fortune."
That's what happened in Central America, the senator said.


It just doesn't make a lot of sense.

Shah replied that the agency has had to make "tough trade-offs in a budget we certainly wish was larger."
Ménendez interrupted Shah, telling him that he's heard the same story before from USAID. He complained that when the agency makes cuts, programs targeting Latin America and the Caribbean always suffer. The senator said:


I just think it's foolish at the end of the day.

* While watching a video of the committee hearing, I didn't hear anyone say how much money may be cut from the Cuba programs, just that a 25 percent cut was planned.
The State Department's Executive Budget Summary for Function 150 & Other International Programs (see document) lists $15 million for Cuba programs in fiscal 2014. That is a 25 percent drop over fiscal 2012. Perhaps that is where Rubio got the 25 percent figure.
The State Department's fiscal 2014 budget does not list a fiscal 2013 figure for the Cuba programs. That number is evidently affected by automatic budget cuts, also known as the sequester (for more on that, see Public Law 112–175).

Note: This article was shared with the Center for Democracy in the Americas as part of a six-month collaborative project with non-profit group. See more about our collaboration here.
Posted by alongthemalecon at 1:55:00 PM