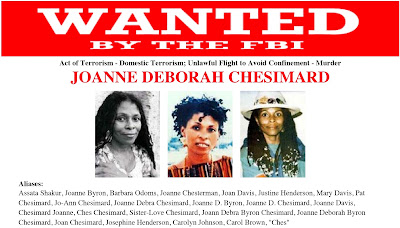 The FBI announced it is offering $1 million for information leading to the capture of Joanne Chesimard, also known as Assata Shakur, among other aliases. The state of New Jersey is pitching in another $1, boosting the reward to $2 million.
The FBI puts her crime under the category of: "Act of Terrorism - Domestic Terrorism."
I'm not condoning any crimes that Chesimard may have committed, but this doesn't seem like an appropriate use of the term terrorism.
Chesimard is accused of being involved in a bank robbery and a shootout with state troopers that ended in the death of one of the troopers.
Tragic, yes. But is that terrorism?
According to the FBI's Newark office:


Chesimard is wanted for escaping from prison in Clinton, New Jersey, while serving a life sentence for murder. On May 2, 1973, Chesimard, who was part of a revolutionary activist organization known as the Black Liberation Army, and two accomplices were stopped for a motor vehicle violation on the New Jersey Turnpike by two troopers with the New Jersey State Police.
At the time, Chesimard was wanted for her involvement in several felonies, including bank robbery. Chesimard and her accomplices opened fire on the troopers, seemingly without provocation. One trooper was wounded and the other was shot and killed execution-style at point-blank range. Chesimard fled the scene, but was subsequently apprehended. One of her accomplices was killed in the shoot-out and the other was also apprehended and remains in jail.

In 1977, Chesimard was found guilty of first degree murder, assault and battery of a police officer, assault with a dangerous weapon, assault with intent to kill, illegal possession of a weapon, and armed robbery. She was sentenced to life in prison.

On November 2, 1979, Chesimard escaped from prison and lived underground before being located in Cuba in 1984. She is thought to currently still be living in Cuba.

Links:
FBI flyer about Joanne Chesimard.
"The Terror Factory: Inside the FBI's Manufactured War on Terrorism" by Trevor Aaronson
Posted by alongthemalecon at 10:10:00 AM

I agree, it is a crime, but not terrorism. I once read that she had gone underground or was keeping a very low profile in recent years. Apparently she now fears being abducted, smuggled out of Cuba and into the US.
A million dollars is a lot of money, and there are Cubans on and off the island with the expertise to do this. If this was to happen, I wonder if the FBI would hand over the money, no questions asked. Would the abductors face charges of human smuggling?

Good question about whether abductors would face charges. I'll bet the FBI would let 'em slide.

Now it can be said that Cuba harbors 'terrorists' and thusly should be maintained on the list of "State Sponsors of Terrorism". Now do you get it?

I was actually thinking that the state of New Jersey is likely to hand over the money, no questions asked. The FBI is more likely to ask questions. I also wonder if other agencies, like customs and immigration, would have questions. Maybe there is someone you can ask out there.

It would be interesting to see the memos showing what members of Congress, the FBI and the State Department said about the idea of raising the reward money before it happened. That paper trail would help shed light on why this is happening now and who pushed it.