From a squalid prison cell, José Gabriel Ramón Castillo came up with a plan to transform Cuba.
Reforms aren’t what’s needed, he decided.
Cuba’s socialist system must be dismantled and replaced with a democracy that guarantees freedom and human rights, he said.
Toward that end, he proposes a national referendum asking Cubans to annul their constitution and hold a convention to write a new one.
“The current constitution doesn’t work for us,” he said in an interview on Wednesday. “It can’t be reformed. It should be deactivated.”
Ramón Castillo, who was released from jail in 2008 and sent into exile, has asked the U.S. government-financed National Endowment for Democracy to get behind his effort. So far he hasn’t had any luck in getting NED support.
He said that has been disappointing because he believes his project – el Plebiscito Nacional Cubano, or National Cuban Referendum – would directly transform Cuba’s political system.
He’s not so sure that some other democracy projects – including many U.S. government-financed operations – would be as effective.
“I very much agree that the United States assists us with the democratization of Cuba. It’s not illegal. It’s immoral, either. That money helps us. I don't criticize that. What I criticize are those projects that don't contribute - or contribute very little - to the democratization of Cuba.”

Ramón Castillo, 56, added that he has no quarrel with groups that obtain U.S. funds to raise awareness of human rights violations, support independent journalists or rally against racial and sexual discrimination. If they can get support, the more power to them, he said. But he is skeptical that their efforts will necessarily further the democratic cause.
Some activists seem more interested in money than in shaking up Cuba’s socialist system, he complained in a May 24 column.
“Opportunists and freeloaders,” he wrote, harvest U.S. government grants while the Castro dictatorship takes advantage of the moment, undermines democracy fighters’ morale and “spouts bullshit all over the place."
“Cuban democrats have lost their way,” he wrote. “The fight for freedom in Cuba has turned into a race for resources and subsidies.”
In the interview, Ramón Castillo said it’s impossible to know how much U.S. government money reaches the internal opposition.
He said Cuban state security agents manage to divert and capture at least some of the funds. They infiltrate dissident organizations. He suspects they even set up their own opposition groups to try to grab some of the aid.
“Resources don’t get there – or very little gets there.”
Complicating matters, agents regularly confiscate activists’ computers, printers and other equipment.
The Cuban government also controls the press on the island, making it difficult for dissidents to get across their message to the Cuban people.
“The opposition in Cuba is invisible,” Ramón Castillo said. “It's not that they have the physical quality of being invisible. They're not seen because the populace doesn't know them.”
He said his national referendum would unite the opposition and give it a visible face.
He said he hopes to return to Cuba to carry out his political work, but will not go to the island unless the government agrees not to send him back to jail. 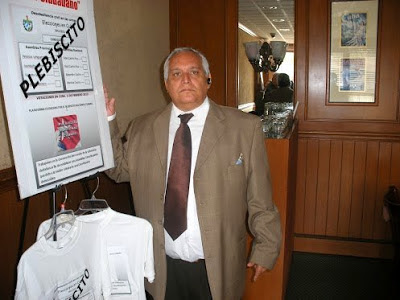 Ramón Castillo, nicknamed Pepín, was born in Manzanillo and grew up in Santiago de Cuba. He has been a journalist and democracy activist for more than 20 years. He was one of 75 people arrested during the Black Spring crackdown in March 2003.
Cuban authorities sentenced him to a 20-year prison term. (See sentencing document, in Spanish). He spent five years in jail before his release to Spain in 2008.
Now a resident of Broward County, Florida, he said prison was a painful time that he wants to leave behind. He doesn’t want anyone’s pity. He wants to focus on his project – the national referendum.
“It’s a project that I prepared in jail. I prepared it, I developed it, I thought it through in my own way.
“I continue believing that nothing that attempts to reform the Castro regime will be successful. The system has to be dismantled and the only way to dismantle it is to annul the Cuban constitution.”
“Many people tell me, ‘Pepin, it's that you want to be president of Cuba.' I tell them, ‘No, it's not that I want to be president of Cuba. I want to represent all Cubans. I have the desire to become president of Cuba.’ But why? It’s not because of that.”
He explains he’s not pursuing power or a mere title. He wants to help transform his homeland into a democratic nation.
“It’s because I believe Cuba lacks new political leadership, a leadership that pulls it from the morass that Castroism has condemned it to. And we have to work toward that.
“I’m not going to be a president in exile. I want to win the presidency inside Cuba.
“All struggles are difficult, but not impossible.”

Note: This article was shared with the Center for Democracy in the Americas as part of a six-month collaborative project with non-profit group. See more about our collaboration here.
Posted by alongthemalecon at 8:25:00 AM