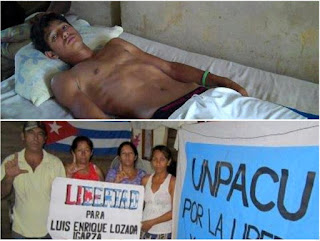 Cuban authorities have released dissident Luis Enrique Lozada, prompting nearly 60 democracy activists to end hunger strikes they had started to protest his jailing.
Lozada had been in custody at the Boniato prison in Santiago de Cuba. He went on a hunger strike on April 9 to denounce his jailing and what he described as an arbitrary arrest.
His wife, Darmis Aguedo; their son, Enrique Lozada Aguedo; and the dissident's brother, Arnold Lozada, began hunger strikes on April 13 to demand that he be freed.
More than 50 other activists soon joined them. Dissident leader José Daniel Ferrer now says Lozada has been released and the hunger strikes are over. Via Twitter, his supporters quoted him as saying:


End of the strike! Thanks to God and those who supported the cause.


Luis Enrique Lozada is a member of the Unión Patriótica de Cuba, or Patriotic Union of Cuba, which Ferrer leads from Cuba.