The State Department this month released some details - and withheld others - in response to a Freedom of Information Act request concerning a Freedom House youth program in Cuba.
The State Department's Bureau for Democracy, Human Rights and Labor financed the program. On June 5, the State Department released Freedom House's Jan. 18, 2008, project proposal in response to an October 2011 FOIA request. (See proposal).
The proposal, marked "confidential," said Cuban youth were not politically apathetic, but needed assurances that neither they nor their families would be harmed if they joined the political opposition.

Longtime dissidents have struggled to gain popular support, particularly among young people. Even so, "democracy activists should more carefully and more frequently reach out to Cuban youth," the proposal said.
The State Department accepted the Freedom House proposal and gave the organization $576,976 for its project, called "Grassroots Initiatives for Civic Expansion in Cuba."
Freedom House carried out the project over a 12-month period in 2008 and 2009. Documents describe it as a "youth and international solidarity program," but don't give details on program activities, strategy or results.
The State Department refused to disclose some documents under the FOIA's exemption 4, which allows the government to withhold "trade secrets and confidential business information."
The proposal includes a waiver saying Freedom House is "not required to publicly acknowledge the support of the Department of State."


...the Cuban government systematically denies ordinary Cuban citizens the freedom to exercise their basic human rights by severely limited their freedom of movement, freedom of expression, and access to independent information. Public discontent has increased in recent years as a result of worsening economic situation for most Cubans and growing inequality within Cuban society. This dynamic is particularly visible among Cuban youth, who have grown up in the post-revolutionary days, and have seen the government's promise of an equitable and fulfilling life go unfulfilled.
Freedom House conducted two public opinion surveys in 2005 and 2007, in which a majority of respondents stated that conditions in Cuba are poor and that change could improve their economic situation and the level of freedoms they would enjoy. 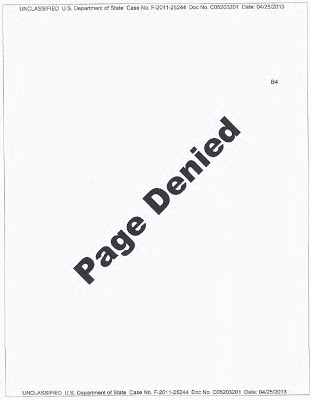 Contrary to convention wisdom, young people in Cuba are not apathetic, the Freedom House proposal said.


In Freedom House's 2007 survey, 59.7 percent also indicated the Cuban people should determine Fidel Castro's successor through a democratic system of government. This number challenges the predominant perception that the Cuban population is politically apathetic. The surveys reveal growing discontent among the Cuban population, particularly among youth, and increases in the number of public manifestations despite the Cuban government's continued efforts to suppress dissent. The surveys show that "Cuban youth are attuned the the inequalities within Cuban society such as discrimination against Cubans vis-a-vis tourists. Specifically, youth are largely concerned with salaries, unemployment, housing, and core human rights issues such as freedom of expression, freedom of movement, and access to information.
Despite widespread discontent, Cuba's traditional opposition has struggled to cultivate popular support, particularly among youth. This could, in part, be attributed to the government's sustained efforts to repress the movement and any signs of growing support for the movement and its leaders such as in 2003 and 2005. Since July 2005, the government has fueled increased tensions and physical assaults against activists and their families and the regime has recycled the practice of actos de repudio (attacks by pro-government mobs). The government's violent attacks on the movement have resulted in a widespread fear of reprisals as a result of openly supporting the movement among the Cuban population, and have successfully isolated the democracy and human rights community from the general population, including Cuban youth.

The proposal said many young people don't get involved in opposition politics because they see it as too risky.


According to the 2007 survey, a majority of youth view Cuban democracy leaders as heroes who risk what others cannot afford to lose, while a small minority suspects that members of the opposition are manipulated from abroad. Experience working with Cuban youth reveals they would be more inclined to publicly demonstrate their solidarity with the opposition if they knew that neither they nor their families would be harmed. The survey suggested, therefore, that democracy activists should more carefully and more frequently reach out to Cuban youth.

The lack of Internet access has hurt the democracy movement in Cuba, the proposal said.


The Cuban government's regulation of Internet access effectively hinders the growth of the democracy movement and has widened the communications gap between the democracy movement and the vast majority of the Cuban population. The average Cuban does not have personal access to the Internet because of the cost, legal restrictions on access, and inadequate Internet infrastructure.

The proposal said Cuba's political opposition "has shown significant signs of progress over the past year," but its explanation is redacted.

Note: This article was shared with the Center for Democracy in the Americas as part of a six-month collaborative project with non-profit group. See more about our collaboration here.
Posted by alongthemalecon at 12:55:00 PM

Tracey, I do not presume to know how you feel about the US developing a program targeting Cuba youth, but I will guess that it troubles you. I humbly ask you to consider that the Castros have been doing the same thing with their 'Che' t-shirts for years. Before you double over in laughter, let me briefly explain. Progressives have long targeted US youth as ripe for implanting ideas like the redistribution of wealth and the evils of savage capitalism. These ideals are embodied in the whole Che mystic. This program simply returns the favor. Obviously I don't have the details (due to redaction) but I would bet that the programs is based on simply saying there is another way to do things. If Cuban youth are simply made aware that despite the failure of Castro-style socialism, all is not lost, I see no harm. What's so bad about promoting choice?

I don't see anything wrong with promoting choice. I wholeheartedly agree with the idea of promoting an expansion of basic freedoms in Cuba. That's not an issue, to me. But I question how effective some of these democracy promotion efforts can be when based on imposition and regime change, and when run largely in secret with little or no accountability to taxpayers.

Moses - and thank you for not presuming to know what I think about democracy programs in Cuba. One blogger wrote - without asking me - that I am against the programs. What's more accurate is that I question some of the tactics and strategy, and I don't think the U.S. government is accountable to the public.