Alan Gross, a soldier left behind

During talks with Cuba earlier this year, the United States reiterated its call for the release of Alan Gross, insisting yet again that the American development worker was jailed solely for trying to help Cubans communicate with the outside world.

At the same time, the U.S. Agency for International Development was busy fielding questions from contractors interested in the latest Cuba-related opportunity: up to $6 million for companies interested in shuttling Cuban democracy activists to third countries for hands-on human rights and democracy training.
One contractor asked:
“Would USAID require that Cuba participants in the program be notified of the source of funds for the program?”
USAID didn’t have a yes or no answer to that question. The agency replied:
“Implementing partners would be expected to take the in-country environment into account to minimize risks, keeping in mind that this is a transparent program…”
Four years after Cuban authorities arrested Alan Gross, pro-democracy work in Cuba remains perilous and the U.S. goal is much the same: To help Cuba's democracy activists push the socialist government from power.
Cuban officials are just as resolute and vow to undermine USAID's democracy programs in any way they can.
“The programs…have an interventionist, hostile and destabilizing nature,” said Josefina Vidal, a senior official at Cuba’s Foreign Ministry in Havana. “They are founded on the principles of the Helms-Burton Act, which aims to achieve ‘regime change’ in Cuba, completely dismantle the economic, political and social system, and impose a government, against the will of Cubans, which serves the interests of the United States.”
“These programs are semi-clandestine and semi-undercover by their nature and by the way in which they are implemented, behind the back of Cuban authorities and surrounded by secrecy about their true intentions.”
As Cuban officials see it, Alan Gross is living proof of the U.S. government’s persistent regime-change campaign.
Gross was a soldier, albeit of a different sort. Instead of the usual M9 pistol, he carried a Samsonite briefcase, plenty of cash and 15 credit cards. In place of a combat uniform and boots, he wore beige Land’s End pants and brown Rockport shoes.
He spoke no Spanish, but was an experienced international development worker and had worked in such hotspots as Afghanistan and the Middle East.
His weapon was technology. He traveled to Havana in 2009 with satellite communication gear, wireless transmitters, routers, cables and switches – enough to set up Internet connections and Wi-Fi hotspots that the socialist government would not be able to detect or control.
He worked for Development Alternatives Inc., a Maryland contractor that USAID had hired to carry out a democracy-promotion program.

Such programs were authorized under the Helms-Burton Act. In response, Cuban authorities in 1999 passed Law 88, which prohibited “acts aimed at supporting, facilitating or collaborating with the goals of the Helms-Burton law.”
So it should have been clear to Gross that what he was doing was illegal under Cuban law. And by all appearances, Cuban agents were ready for him. They monitored his activities at first, then arrested him after his fifth trip to the island.
The U.S. government had trumpeted its attack strategy in advance, depriving Gross of the element of surprise. As far back as 2006, the State Department had said it was looking for contractors who could provide “creative and innovative” ways to “break the information blockade” in Cuba using “high-tech communication devices.”
Disclosing such opportunities is a hallmark of competitive bidding, but it also alerts Cuban authorities, putting someone like Gross at a severe disadvantage.
“It's kind of naive, very naive really, to think that you can go into Cuba and operate a program like that,” Cuba expert Phil Peters said. “It was the most predictable catastrophe that one could imagine. I mean, Cuban state security is not a casual 9-to-5 organization. They don't have a lackadaisical attitude about things like this. The idea of the U.S. government setting up a bunch of Wi-Fi hotspots throughout the capital and other places in the country is not something that they're going to take lightly.”
Peters, a former State Department official, has studied Cuba for more than 20 years and travels to the island frequently. He said trying to set up satellite Internet connections in an authoritarian nation like Cuba “makes no sense at all even if you love the purposes of it.”
“I don't think it's really possible to explain logically how it's all supposed to work at the operational level. And then, of course, Mr. Gross was a little bit naive to think that he could do what he was doing as if he was in Hartford, Connecticut, instead of Havana, Cuba.”
After Cubans threw Gross in jail, he lost:


Gross, now 64, gave up something even more valuable: His freedom.
A Cuban court sentenced him to 15 years in jail. If he serves the full sentence – and survives prison – he won’t be out until 2024 when he is 75.
Lawyers for Gross say DAI and USAID refused to accept any responsibility for his troubles after his arrest. In November 2012, Gross and his wife Judy sued the contractor and the government for $60 million.
“Alan is a pawn from a failed policy between the two governments… two countries that don’t have diplomatic relations,” Judy Gross told a reporter after her husband’s conviction. “The trial wasn’t about him. It was about USAID and U.S. policy towards Cuba.”
DAI settled for an undisclosed amount on May 16, 2013. Twelve days later, U.S. District Court Judge James Boasberg threw out the family’s claim against the government, saying it was immune from prosecution. The family appealed the ruling.
DAI chief executive James Boomgard said Gross was simply providing humanitarian aid to Jews in Cuba.
“It's such an innocuous, innocent thing,” he told a reporter after Gross’s arrest. “I'm not a Cuba expert, but other people who understand the politics of this are puzzled as well.”
U.S. officials have expressed similar amazement and have dismissed notions of a “regime-change” strategy:


The tune was much the same after the July 17 U.S.-Cuba talks. The State Department reiterated its call for the Gross’s release, saying he’d been imprisoned “solely for trying to facilitate communications between Cuba’s citizens and the rest of the world.”
Court documents filed in the Gross lawsuit revealed there was much more to the story. His memos to DAI showed he envisioned setting up satellite Internet connections for Jews in seven Cuban provinces, then expanding his effort to include as many as 30,000 Masons at more than 300 lodges across the country.
Cuban Jews had "strategic value" because of their religious, financial and humanitarian ties to the United States, Gross wrote. Jewish synagogues were a "secure springboard through which information dissemination will be expanded.” 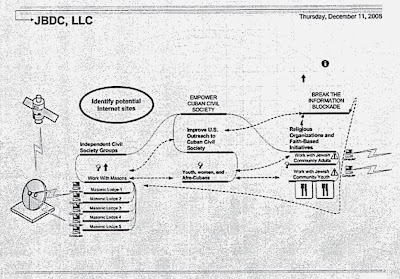 Tracey, if it is in the best interests of Cuba to engage in negotiations with the US for the purpose of normalizing relations, why wouldn't the Castros immediately release Mr. Gross? The US has said over and over again that there will be no trade of the four (soon to be three) remaining spies for Mr. Gross and that future negotiations are impossible as long as he remains imprisoned. Given the Mariel Port project and other pressing economic issues that would appear to hinge upon the lifting of the embargo, what leverage do the Castros believe that Mr. Gross adds to their side? On the other hand, think of the public relations coup the Castros will reap if they put Gross on a plane for 'humanitarian' reasons. Am I missing something?

Most of countries blacklisted by Washington for different excuses, has one thing in common – American Jewish Lobby have some problems with them.

R.M. Schneiderman, editor and writer for Newsweek and the Daily Beast, wrote in the Foreign Affairs Magazine (December 21, 2012) that the single biggest reason Barack Obama cannot make peace with Cuba – is Alan Gross, US Jewish citizen serving out 15-year prison sentence in Havana. Cuban officials claim that Alan Gross was working for the US government and trying to subvert the state while working as a contractor in Cuba.