The U.S. government has awarded a no-bid $1.4 million contract to a company that will produce "TV and radio programs designed specifically for audiences in Cuba."
The contract went to Canyon Communications, founded by Jeff Kline. The Office of Cuba Broadcasting said it awarded the contract without a competitive bid because Canyon Communications was uniquely qualified for the job.


Based on the needs of the Office of Cuba Broadcasting (OCB), Canyon Communications is the only known source with the demonstrated ability to produce programming specifically designed for a Cuban audience.
In the opinion and to the knowledge of the government evaluator, the contractor is uniquely qualified to deliver this programming due to their extensive experience in this area, including successful performance under a previous OCB contract last year, which was awarded based on the contractor’s unsolicited proposal.

Kline is a longtime government contractor who has worked for the Health and Human Services Department, the Labor Department and other agencies. Lately, he's been doing projects for the Broadcasting Board of Governors, or BBG, which oversees the Office of Cuba Broadcasting, including Radio & TV Martí in Miami.
In October, I wrote about a radio programming contest that Kline ran in Cuba without telling participants that it was funded by the U.S. government. The contest was aborted and no one was awarded any prizes after Cuban authorities arrested development worker Alan Gross in December 2009. (See "Taxpayer Contest Aborted").
Earlier, in May 2014, I wrote that that Kline had traveled to Cuba to test cell phones and other wireless devices for a State Department contractor. (See "The Other Alan Gross").
In February 2014, I wrote about his contract to produce self-help videos in Cuba. (See “The incredible disappearing $450,000 contract”).
Kline's company, Canyon Communications, signed the $1,450,063 BBG contract on Sept. 30, 2014. His company has won a total of $1,799,503 in BBG contracts since 2013. That makes him the BBG's 56th winningest vendor since 1999.
(Another one of his companies, the Pinyon Foundation, won an additional $450,000 in 2013 - see record. Canyon Communications appears to have carried out that contract, documents show. That would bring the company's total contracts to $2,249,503, which would boost Kline's rank on the top 100 list to 44. See Top 100 here).

The BBG had announced its interest in finding a contractor for Cuba programming on April 14, 2014. Its announcement stated:


The BBG is seeking to ascertain if there are firms available who are capable of developing and producing specialized Spanish language multimedia programming specifically designed for broadcast to Cuba. The BBG is most interested in firms that have produced programming for broadcast to Cuba focusing on entrepreneurship (i.e., how to start a business, examples of successful small businesses that have been created through personal initiative, etc.), and profiles of well-known artistic persons or groups living in Cuba.

Canyon Communications, which lists a corporate address of 1180 South Beverly Drive, Suite 500, Los Angeles, and one other company responded to the BBG's request for proposals, sending in statements explaining why they would be suited for the job.
The BBG stated:


After a technical evaluation of the two statements, it was determined that while the Canyon Communications capabilities statement clearly demonstrated that the company had extensive experience and unique ability in developing and producing programming for Cuban audiences. The proposal from the other company did not demonstrate having any capability or demonstrated experience providing programming for this requirement. In addition to the RFI responses, OCB is not aware of any other production company that has this experience and capability.

The BBG explained why Canyon Communications was qualified:


As a result of an unsolicited proposal submitted in FY 2013, Canyon Communications, LLC was awarded a contract by the BBG to provide the same type of programming for OCB. Under this contract, Canyon produced a number of radio and television programs. The video and audio programs maintain an essential component which is a unique and often very “up close” production style that captures a grass roots approach.
The continued use of the overall format of the productions including talent used, unique video and audio production techniques and core content message is essential for the success and the overall continuity of OCB’s and Radio and TV Marti’s branding and mission.
Although Canyon assigned the copyright to all programming to the BBG, only Canyon can realistically produce a continuation of these programs, making the programming highly unique and available only from this source. Canyon also assigned all trademarks, including show titles, to the BBG.
It is in OCB’s interest to continue to use the same crew and performers, as well as the same style of graphics and show opens and closes as were used under the previous contract in order to have the programming look and feel the same to our audience. 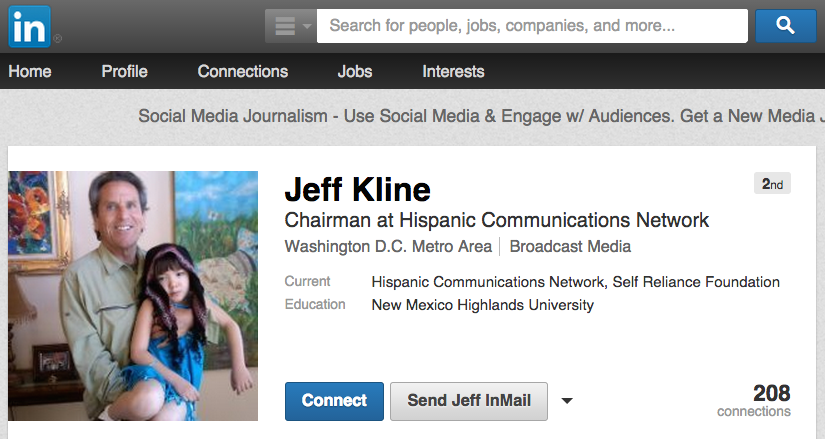 
I've been fortunate to have produced media and created media distribution platforms in English, Spanish and Arabic to inform, inspire and educate. In most cases I have created teams of people from within the cultures being served- Hispanics, Palestinians, etc. who then create their own media within their own cultural context to inspire and empower others to share their own ideas for a postive (sic) future based on universal human values that promote free expression, mutual respect, cross cultural cooperation, human rights including women's rights, bio-diversity, environmentally sustainable development and health.
Organizations I founded and whose overall policies I continue to direct are the largest providers of Spanish-language educational media and of systems that can link people to direct social services in the USA.