Applied Memetics, a federal contractor that began managing a team of journalists in Cuba in 2012, has received more than $1.4 million in grants since 2012, records show.
The company says it has the ability to "create content on massive scale and deliver it when and where consumers want it."
Dan Gabriel, a former covert action officer for the CIA, heads the firm, based in Arlington, Va. (For background, see "Ex-CIA agent leads team of journalists in Cuba"). 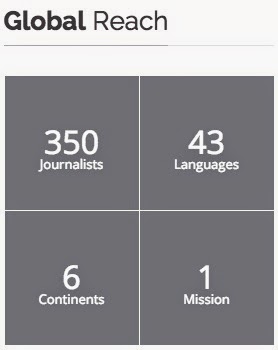 The website includes a graphic that refers to its "global reach." It says "350 journalists, 43 languages, six continents, 1 mission." In an earlier version of this post, I interpreted that to mean that Applied Memetics has expanded its operations and handles 350 journalists on six continents. I concluded that the company was now operating in such countries as Venezuela and Tunisia.
However, I haven't confirmed that with the company and don't know whether I was jumping to the wrong conclusion. I've asked Dan Gabriel if he could confirm the information - I'll post any new details once I have them.


Webstringers says the company's services include:

Media capacity building
We provide capacity-building to increase media and communication literacy and create vibrant media sector in semi-permissive environments. This is achieved by providing logistical and training support to independent journalists to provide quality coverage. By empowering independent journalists, we work toward creating pluralistic and participatory societies, where media, local government officials, traditional leaders, civil society actors, and others can interact and better understand each other.

Branded content creation
Our branded content service offers you digital media production for global advertising and marketing campaigns. This is achieved by combining existing brand research, linguistic profiles, audience characteristics, consumer behavior research, and audience listening programs to help identify what content you should provide. We utilize our skilled expert team and resources to drive value for our customers through consumer insights, strategic collaboration and creative excellence. We will work with you to build strategic campaigns, while staying active, agile, and aware of global trends in brand content creation and management. Our team can create content on massive scale and deliver it when and where consumers want it, helping your organization attract global audiences in this new world of real-time marketing. We are committed to growing our capacities to meet our customers’ evolving needs.

Analytics
We offer unmatched data analytics services to help you understand global audiences, in this fast-paced, constantly changing world. Our expert team will perform qualitative and quantitative analytics to help you discover important patterns in the data, and then communicate the results to have the biggest possible impact.