Directorio Democrático Cubano was founded 25 years ago in Miami Beach. Back then it was called the International Congress of Cuban Youth for a Free Cuba. Members changed the name to Directorio in 2002.
Now based in Hialeah, Fla., the organization gives direct aid to Cuban dissidents and carries out radio broadcasts to the island. Its co-founder and national secretary is Orlando Gutierrez Boronat, who made headlines in April after getting into a fistfight in Panama City where the Summit of the Americas took place. His foe that day was Alexis Frutos Weeden, identified as a Cuban intelligence chief.
Gutierrez' wife, Janisset Rivero-Gutierrez, is adjunct national secretary of Directorio Democrático. Board member Lorenzo L. de Toro is her brother-in-law. The executive director and co-founder is Javier de Céspedes.
U.S. taxpayers provide most of the funding for the Directorio, which received $6,272,110 in government grants from 2009 to 2013, tax records show.

The organization's mission is to try to bring about democracy in Cuba through a "civic, nonviolent struggle" that includes support for dissidents, "exchange of information with the Cuban people," and "international solidarity with the pro-democracy movement in Cuba," Directorio's website says.
Directorio's projects include Radio República, offering news, debate and entertainment, and La República newspaper.
In 2008, the Directorio issued a statement defending how it spends its money after the Cuban American National Foundation issued a report criticizing the organization.
According to an IRS form 990 filed on Nov. 24, 2014, the group spent $951,862 in 2013. That included $382,305 in salaries and other compensation and $569,557 in other expenses.
Salaries include:


There was no breakdown for the remaining salaries.
Other expenditures listed in the report included: 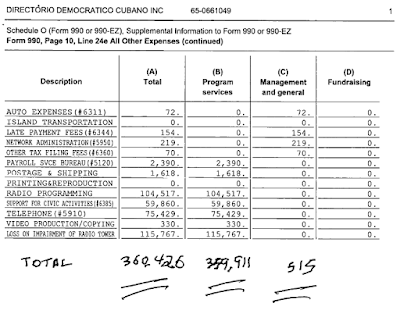 Payments to individuals outside the U.S. included: