Office of Cuba Broadcasting: Where the money trickles up

Government salaries never cease to amaze. More than a third - 37 percent - of the employees at the Office of Cuba Broadcasting in Miami earn more than $100,000 per year. The vast majority - 92 percent - earn more than $80,000 per year.
The median salary at the OCB is $95,591, which is more than two and a half times the $35,870 median salary for reporters and correspondents nationwide, according to Department of Labor statistics.
The OCB's median salary is 1.7 times greater than the $55,380 median salary of broadcast news analysts around the country.
Except for one poor soul who earns $38,787 per year, everyone at the OCB makes a decent wage - or more.
And so as Cuba's Josefina Vidal insists Radio & TV Martí be shut down, you can bet these OCB employees will be fighting for their jobs.
OCB top dog Carlos García-Pérez earns $170,000 per year. No. 2 is administrative officer Irvin Rubenstein, at $157,100. No. 3 is Alberto Pando, at $145,852, followed by José Costa Jr., at $145,701.
You wouldn't know it's a time of belt-tightening at the OCB. The office handed out $48,000 in bonuses in 2012. No bonuses were passed out in 2014, according to the Feds Data Center.

Salaries in 2014 totaled $11,514,896, which was about 42 percent of the OCB's $27,043,000 budget.
The OCB requested nearly $4 million less for fiscal year 2015, which ends Sept. 30. But the BBG's 2015 congressional budget request shows that the OCB "may receive up to a $5 million transfer from the Economic Support Fund to support programs and activities allowed in accordance with the Cuban Liberty and Democratic Solidarity (Libertad) Act of 1996. This will leverage the well-established relationships on the island maintained by OCB to conduct activities in accordance with the Libertad Act."
OCB's congressional allies are determined to keep the operation running and $5 million in State Department funds can't hurt the cause.
The OCB manages a network of journalists on the island and says it has steadily expanded its audience in Cuba.
OCB's Miami crew earns most of the money. Salaries for its 115 employees are below, followed by details on the OCB's goals and accomplishments. 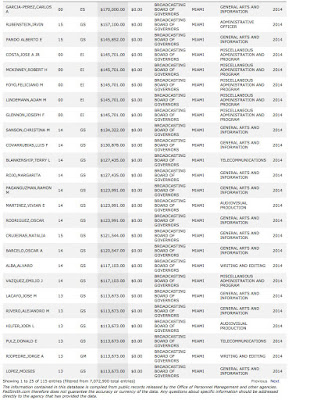 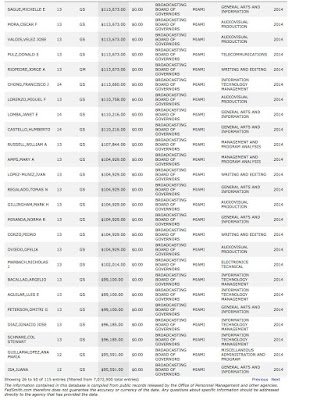 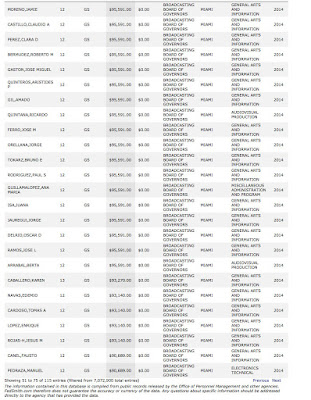 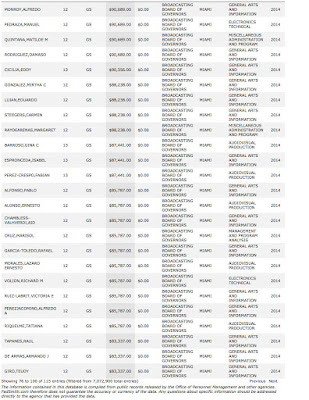 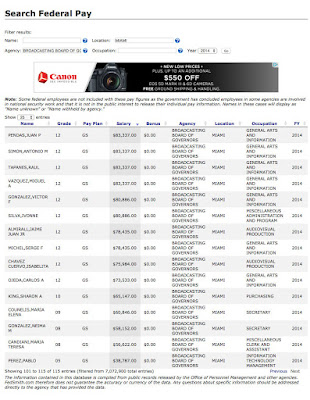 Providing High Quality Local Reporting on Topics Important to Cubans
OCB has doubled the number of news reports it produces on the island, providing audiences with more in-depth local coverage—something that is of maximum interest to Cuban audiences. The Martís have assembled the largest network of independent journalists working inside Cuba. These journalists send reports (which include audio, text, video, and photos) from multiple sites around the island via telephone, SMS, and Internet. Thanks to an OFAC license granted in late 2012, the Martís are now able to hire Cuban nationals working inside Cuba as multimedia journalists and producers, and OCB has created a small network of Cuban journalists working in various parts of the island exclusively for the Martís. The reports they produce directly from the island are used on a daily basis in our newscasts and compiled in a monthly TV Marti special program called Desde Adentro – “From Inside” (Cuba). The reports are also cached on martinoticias.com and distributed on the island on flash drives and DVDs.
TV Martí increased its original programming, including information and analysis, interviews, documentaries, series, music, and live coverage of news and events, while diversifying content with social, economic, sports and technological topics. TV Martí launched the special program series … en sus propias palabras (“…in their own words”) which includes one-on-one interviews with the most important leaders of the dissident movement on the island, such as Yoani Sánchez, Berta Soler, Antonio Rodiles, Eliecer Avila, Guillermo Fariñas, and others.
OCB’s popular series, Avanza Cuba (Cuba Forward), is broadcast live across all platforms, including social media. Two of the programs took place in academic settings with audience participation including one at Miami Dade College and another at the School of Communication at the University of Miami. Topics included using the Internet in business promotion, exploring freedom of information in Cuba and Latin America, accessing the Internet in Cuba, as well as information on such topics as the law and rights, medicine, and religion in Cuban society.
TV Marti’s flagship programs Antena Live and 7N30 have continued to offer our audience news and information on current issues, including special coverage of international news events such as the crisis in Venezuela, and special live coverage of events such as President Obama’s meeting with Cuban dissident leaders in Miami, Florida, which was also covered live on Radio Marti and martinoticias.com.
TV Martí’s productions have received several local Emmy Award nominations in the last several years. In 2013 TV Martí received three local Emmy nominations for its special programs La Nueva Cuba de Las Damas de Blanco (The New Cuba of the Ladies in White), La Caridad Nos Une (The Virgin Unites Us), and Sueno Olimpico (Olympic Dream).

Reaching Audiences via Digital and Social Media
The Martís reach out to nearly one million Cubans each week via email and SMS initiatives, providing news and information that would otherwise not be available to them. Their SMS initiatives also allow for Cubans to send news tips and alerts that the Martís curate and develop into news stories when appropriate. In 2013, OCB deployed its SMS-based social network, Piramideo, which allows Cubans to communicate with each other free from government control. OCB also launched a martinoticias.com app for Android and iOS. In FY 2013 web traffic on martinoticias.com averaged between 180,000 and 200,000 visitors per month, and produced almost 3 million total visits (2,953,649), an increase of 73% over 2012. OCB continued to grow its social media integration across all platforms to engage in news-gathering and audience engagement around Martí content.
In addition, OCB launched an English version of its website that collects and translates the Martís’ most compelling content from Spanish into English.

Utilizing Alternate Distribution Methods to Reach the Island
OCB continued to use alternative means of distribution for Martí original content across the island. This includes paper and plastic flash drives which are easy to distribute and hard to detect or censor.
This cutting-edge technology allows users to store data in plain paper, which is mailed directly to Cuban homes and businesses. Content saved into the paper flash drive can be read off-line, or if the user is connected to the Internet, it can provide OCB with statistics of web traffic and usage. The Martís have been able to acquire more than 1.5 million contacts on the island that can potentially receive this new means of distribution.
OCB developed an alternative network for the delivery and distribution of Television Martí programs on the island that extends across the country, including the 15 provinces and the municipality “Isla de la Juventud.” This network includes six copy centers, 15 points of reception, and 24 distribution points in the island. OCB has sent thousands of DVDs and hundreds of flash drives to the island with TV Martí programs. To increase delivery and enable faster turnaround of our content, we have also initiated digital sharing of programs such as Antena Live and 7N30 via email as soon as they are recorded.

Providing Programming about America
OCB issued a Special Public Service Announcement recorded with officials from the State Department updating Cuban audiences on travel policies and legal immigration to the United States.
For the first time, Radio Martí offered Cuban audiences live, play-by-play coverage of the NBA playoffs and finals. This was in addition to the broadcast of Major League Baseball regular and post season games.


Notable FY 2015 Program Changes
In FY 2015, the BBG anticipates that OCB may receive up to a $5 million transfer from the Economic Support Fund to support programs and activities allowed in accordance with the Cuban Liberty and Democratic Solidarity (Libertad) Act of 1996. This will leverage the well-established relationships on the island maintained by OCB to conduct activities in accordance with the Libertad Act. At the FY 2015 Budget Request funding level, OCB may be required to reduce the number of positions.

Related: Fat salaries for Cuba broadcasting employees
Posted by alongthemalecon at 10:59:00 AM