BBG to Inspector General: Give us a break 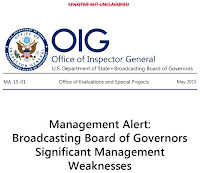 The Broadcasting Board of Governors, which oversees Radio & TV Martí, reported earlier this year that it had resolved most of the recommendations found in a critical 2013 Office of Inspector General report.
In a May 19 follow-up report, the OIG continued to refer to "ineffective leadership" at the BBG. It also criticized leadership at the Office of Cuba Broadcasting, where it said "employee morale was a concern. Staff expressed that management did not communicate effectively and that decision-making processes lacked transparency." See audit.
In a letter to the OIG, the BBG said the language of the "sensitive, but unclassified" follow-up report was not fair because the board had "worked diligently over the past three years to address the concerns" and had resolved "all but two of the 164" OIG recommendations.
Posted by alongthemalecon at 6:53:00 AM

Email ThisBlogThis!Share to TwitterShare to FacebookShare to Pinterest
Labels: broadcasting board of governors, office of inspector general