Evolution of a $10 million deal

On Oct. 8, 2011, I filed a Freedom of Information Act request for contracts between the U.S. Agency for International Development and Grupo de Apoyo a la Democracia, based in Coral Gables.
USAID responded earlier this month, sending me contracts and a September 2000 letter from the agency to the group's director, Frank Hernandez-Trujillo.
The documents show that USAID gave Grupo de Apoyo more than $10 million from September 2000 through August 2010.
By December 2007, the organization had reported spending half that amount on shipping and delivery costs, a whopping $5,294,047.
At that time, Grupo de Apoyo also listed: 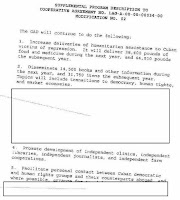 USAID's contributions to Grupo de Apoyo included $250,000 in emergency relief funds: $50,000 for Hurricane Charley and $100,000 each for Hurricanes Dennis and Wilma.
In the beginning, Grupo de Apoyo - then called Grupo de Apoyo a la Disidencia - focused mostly on humanitarian aid for political prisoners, including the distribution of food and books. But it soon expanded into other areas, including hurricane relief, the promotion of "independent clinics, independent libraries, independent journalists, and independent farm cooperatives" and meetings between "Cuban democratic and human rights groups and their counterparts abroad." And the Miami group's initial $400,000 contract with USAID mushroomed into an agreement worth millions of dollars.


Given the nature of the Cuban regime and the political sensitivity of the USAID program, USAID cannot be held responsible for any injury, incarceration or other harm or inconvenience suffered by individuals traveling to and performing work in Cuba under USAID funding. The recipient hereby holds harmless and indemnifies USAID of any liabilities, damages, injuries, claims, suits, judgments, causes of action, fees, and expenses suffered or incurred in the performance of this award by itself or any of its subcontractors or sub-awardees.