Cuba On-Line Inc. began in 1999 as a modest $300,000 program to send newsletters to Cuba. It soon blossomed into a $5 million project aimed at reaching out to dissidents and human rights activists and helping to "foster the transition to democracy," according to documents obtained under the Freedom of Information Act.
University of Miami history professor Jaime Suchlicki led the program, which was financed by the U.S. Agency for International Development, or USAID.
On Oct. 8, 2011, I asked USAID for contracts related to the program. The agency replied on Sept. 30, 2015, sending me 94 pages of documents.
Suchlicki proposed the program on Aug. 27, 1998, the documents show. He called it the Democratic Information Project. It was not his only enterprise. Suchlicki was also - and still is - director of the Institute for Cuban and Cuban-American Studies, or ICCAS.
In December 2010, I reported that the U.S. government had given the institute more than $6 million since 2002, according to federal audits. (I wanted to update that number today, but the Federal Audit Clearinghouse was offline and isn't expected to be back up until December. Federal officials took the site down in July after activists linked to the group Anonymous hacked it and posted the phone numbers, usernames and passwords of thousands of users, Federal Times reported.)
Suchlicki received an additional $5,340,000 for Cuba On-Line from 1999 to 2007, contract records show. More details about that are below.
First, a word about Suchlicki. The professor drew some controversy earlier this month when the institute said it had received information that Gen. Leopoldo Cintra Frias, head of the Cuban Armed Forces, had visited Syria and was leading Cuban military personnel in support of Syrian President Bashar al-Assad. The institute said:


The Cuban military contingent will be primarily deployed in Syria manning Russian tanks provided to Assad by the Russians. It will also operate as a military force against ISIS and other opponents of the Assad regime.

On Oct. 14, Fox News and other outlets ran with the story, which quoted Suchlicki and an anonymous U.S. official.
White House Press Secretary Josh Earnest told reporters the next day:


We’ve seen no evidence to indicate that those reports are true.

The Cuban government also denied the story was true. A diplomat from the Cuban Embassy in Damascus told Sputnik News:


It's pure lunacy. It is as if they were claiming that Russia had sent its troops to Madagascar to protect lemurs.

Álvaro Fernández, editor of Progreso Weekly, said such episodes hurt the reputation of the ICCAS, which some people regard as an important center for research and education. He accused Suchlicki of creating a "fog of lies" and said the professor "deserves to be fired by the University and investigated by The Miami Herald." He wrote:


Neither of these two things will happen, of course. We’re in Miami.

Miami is home to many Cuban exiles who are anxious to see a democratic transition in Cuba. Toward that end, Suchliki proposed Cuba On-Line in 1998. USAID gave the project $300,000 on April 29, 1999. 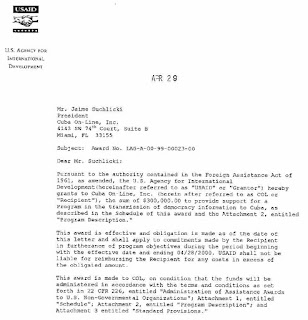 According to the project description:


The Cuba On-Line proposal will transmit information on democracy, human rights and free market economics directly to the Cuban people, through the international mail system, by fax and by e-mail. Subsequent to approval of the cooperative agreement, Cuba On-Line will submit a detail operational plan which USAID will approve after consultations with the U.S. Department of State. Mailings and other transmissions will be carried out in such a way as to minimize detection and interference by the Cuban government.
Cuba On-line will produce twice-monthly Spanish language newsletter for transmission to the Cuban people. Topics will include the development of democratic institutions, case studies of democratic transitions in Eastern Europe, the relationship between democracy and free market economics, as well as international press coverage of Cuban political institutions and human rights violations. Approximately 96,000 copies of the newsletters will be mailed to Cuban addresses during the period of the cooperative agreement. About 3,960 copies will be sent by fax to Cuban addresses. In addition, approximately 24,000 copies of the newsletters will be furnished to the U.S. Interests Section for its channels of distribution.
Cuba On-Line will also transmit to Cuba approximately 12,000 pamphlets, monographs and other Spanish language materials prepared by third parties. The Recipient will conduct all of its activities in a manner consistent with official U.S. Government policy toward Cuba.


The activity provides direct outreach to the Cuban people and supplies information that will foster the transition to democracy and the development of understanding of the functioning and implications of democratic political institutions and other relevant social and economic aspects of free societies. The outreach is made possible through the production of a newsletter, which is mailed to a significant number of selected Cubans.
The twice-monthly newsletter includes information on the process of development of democratic institutions, aspects of transformation in Eastern Europe, the relationship of markets and democracy, and the role of civil society in democratic states. It focuses on topical developments in Cuba and around the world that illustrate how democracy, civil society, and market economies function. Reports and other documents on the structure and culture of democratic states and institutions, foreign press coverage on Cuba, and materials illustrating day-to-day functioning of democratic institutions in other countries are also used. A brief summary of recent developments in Cuba not covered by the state media is included in the newsletter as well. All information contained in the newsletters will be developed after consulting focus groups drawn from the ranks of Cubans who have migrated to the U.S. during the past five years.
264,000 copies of the newsletter will be mailed annually by Cuba On-Line. 4,800 copies of the newsletter will be sent via e-mail. The selection and editing of materials for the newsletter will be done by Cuba On-Line consultants.
If newsletter costs are under budget, other materials on the issues of democracy prepared by the U.S. and other country third parties will be mailed from North American, Caribbean, and European countries.


Reports from the island and findings of an independent evaluation confirm that the project has been successful in reaching its target audience.
The proposed second year funding will continue to provide for the use of focus groups. The recipient will also continue a concerted effort to obtain feedback from Cuban recipients and will broaden its contact with Cuban human rights activists and other independent groups on the island.


The Recipient will continue to expand and improve outreach to the Cuban people by doing the following activities:


In January 2007, USAID contributed another $400,000 toward the project. The last project update said:


Cuba On-Line, Inc. will continue to transmit news and information to Cuba on democratization, market economies, and the building of a civil society. Under this program, Cuba On-Line will, twice a month, produce its newsletter Sin Censura and mail 20,000 copies of their publication and 7,500 e-mail newsletters to Cuban e-mail accounts. Each month, Cuba On-Line will send 400 CDs of their publication Sin Censura materials and will maintain all other aspects of its outreach to the Cuban people to assist them in the process of transition to democracy.

Great Tracey, once again congrats on your work.
Arnold August