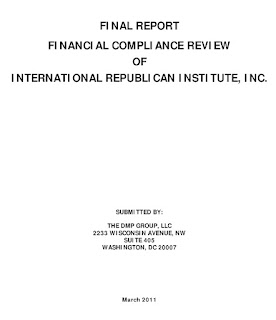 A contractor for the Agency for International Development submitted nearly a quarter million dollars in questionable expenses in 2009 and 2010, according to an audit obtained under the Freedom of Information Act, or FOIA.
The contractor, International Republican Institute, or IRI, claimed unsupported costs of $244,856 while running a Cuba program on behalf of the U.S. Agency for International Development, the audit said.
The DMP Group, based in Washington, D.C., performed the audit. I asked USAID for copies of DMP audits on March 18, 2011. USAID responded on Sept. 25 - four years, six months and seven days later.
The DMP examined IRI expense reports dated from March 1, 2009, to March 31, 2010. That was only a fraction of the expenses that IRI submitted as part of its multimillion-dollar Cuba contract.
The DMP audit found "weaknesses with regards to IRI's financial management system."


We questioned unsupported costs of [redacted] due to the lack of cost or price analyses documented in the procurement files. This is a repeat finding from the previous financial compliance review form dated May 2009.

Per 22 CFR 226.45, "some form of cost or price analysis shall be made and documented in the procurement files in connection with every procurement action. Price analysis may be accomplished in various ways, including the comparison of price quotations submitted, market prices and similar indicia, together with discounts. Cost analysis is the review and evaluation of each element of cost to determine reasonableness, allocability and allowability."
During our review of federally-funded procurements of goods and services, we reviewed four procurements of goods and services purchased under the USAID Cuba Program grant totaling $244,856 in contracted amounts. Three of the four procurement files reviewed for these contracts did not contain adequately documented cost and/or price analysis to support the reasonableness, allocability and allowability of the costs incurred. Below is a list of vendors and questioned costs. Vendor names have been coded to protect the identity.

In response to the criticism, IRI officials told the DMP Group that they were improving their financial practices. DMP quoted the contractor as saying:


With that said, we cannot overstate the difficulties of obtaining competitive pricing in a closed society like Cuba.

DMP had warned IRI in May 2009 that some of the contractor's practices were ineffective, but the contractor failed to correct its mistakes. The auditor said:


Grantee should continue to take necessary steps to ensure that its policies and procedures surrounding cost and price analysis are effective for meeting federal requirements.