Four years ago today, I sent a letter to the U.S. International Agency for International Development, asking for information about a program that the Pan American Development Foundation was running in Cuba.
USAID responded the other day, sending me 123 pages of documents related to millions of dollars in PADF spending. Unfortunately, USAID redacted or withheld just about every trace of information that might shed light on just what the the non-profit organization was doing in Cuba.
The documents make reference to several programs, but give no details.
For instance, a Sept. 1, 1998, letter says that USAID gave PADF $236,700 "to provide support for a program in environmental civil society."
USAID redacted the program description. 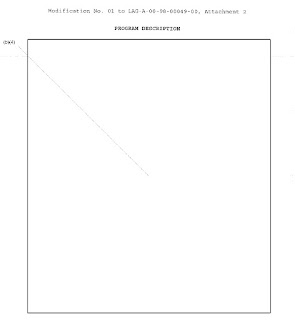 Guidelines for the award said "no funds or assistance under this cooperative agreement may be provided to the Cuban government."
That makes sense. But the money wasn't for dissidents, either:


...no USAID funding made available under this grant or cooperative agreement will be used for cash assistance to individuals residing in Cuba who are dissidents or victims of political repression or to Cuban democratic or human rights groups.

And it wasn't for the Catholic Church. A November 1998 document states:


At the request of Catholic Church officials in Cuba, no USAID-funded material assistance, direct or indirect, is to be provided to the Catholic Church in Cuba, with the exception of books and other international material. Other exceptions may be authorized if requested in writing by the CARITAS Director in Cuba, but the authorization must acknowledge the assistance is requested from USAID funds.

So whatever happened to that money is a mystery to me.

One document says USAID funded PADF so it could "continue to strengthen the institutional capacity of independent groups in Cuba."
A Dec. 28, 2001, document states:


Support will not be limited to environmental/natural resource conservation groups or issues.

Perhaps the grant was initially for "environmental civil society," then the program was changed.
On July 21, 2009, according to the documents, USAID gave $3 million to PADF for a two-year program called, "Expanding Support for Civil Society in Cuba." 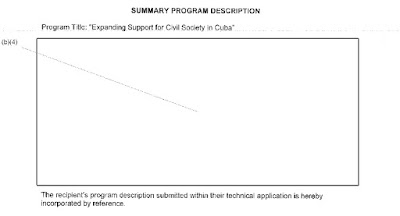 USAID redacted the description of the program, but included a travel liability clause:


Given the nature of the Cuban regime and the political sensitivity of the USAID Program, USAID cannot be held responsible for any injury or inconvenience suffered by individuals traveling to the island under USAID grant funding.