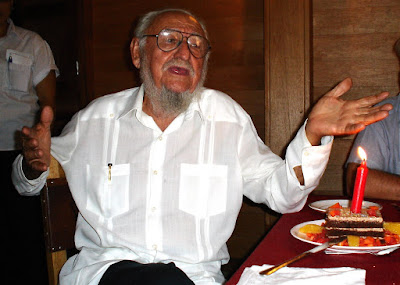 CubaDebate reported that Ramón Castro died earlier today. He was 91. I met the oldest of the Castro brothers at his 80th birthday party. See story.
Posted by alongthemalecon at 8:27:00 PM No comments:

The U.S. Agency for International Development on Wednesday extended the deadline for applications from organizations interested in providing "humanitarian assistance to political prisoners and their families, and politically marginalized individuals and groups in Cuba."
The deadline is now Feb. 29.
Grant amounts will range from $500,000 to $2 million.
USAID warns that organizations should avoid sending American citizens to Cuba as part of the program, presumably because they would be more easily detected.

Prospective applicants have submitted questions to USAID about the program. One question read:


Is this program endorsed by the Cuban government?


This program operates under the jurisdiction and authority of U.S. law.

Another question dealt with the need for secrecy.


Is it possible to request a waiver for the reporting of this award on usaspending.gov due to the sensitive nature of the work?


Requests for waivers are considered on a case-by-case basis. However, USAID will not be applying at this time for a deviation for this program from the DATA Act nor OMB memorandum M-15-12 regarding usaspending.gov.

A federal judge today denied a Vietnam veteran's request to have his federal benefits reinstated after he returned to his native country of Cuba more than three decades ago.
Otto Macias, 75, has no chance of appeal, according to his lawyer, Jason Flores-Williams.
Flores-Williams said in a statement:


The federal judge in Otto Macias v. the Veteran’s Administration—matter of Cuban American war hero whose benefits were terminated due to the Cuban Embargo—had three options with regard to how he could rule on the extensive, exhaustive Writ of Mandamus filed on behalf of Mr. Macias. He could: (1)order the government to respond; (2)Grant the Writ in order to bring the VA into compliance with current administration policy; (3)Deny it outright without further review.

Today, he denied it outright.

The Rules of Ethics prohibit attorneys from criticizing judges and their decisions. However, my experience has shown me that unless you are a corporation or the government, then relief within the American judicial system is rarely available. In a time of great historic change between our countries when the main sticking point is human rights, one would hope that we could at least exemplify our commitment to due process.


President George W. Bush appointed the judge, Bruce E. Kasold, to the U.S. Court of Appeals for Veterans Claims in December 2003.
He was named chief judge of the court in August 2010.
According to AllGov.com, Kasold was born in New York City in 1951. He attended St. John the Evangelist School and later graduated from Bishop McGann-Mercy Diocesan High School in New York.
He went to the U.S. Military Academy at West Point in 1973. Later he attended the University of Florida Law School. "Perry Mason" and other law shows inspired him, AllGov says.
One other bit of trivia, according to AllGov:


From November 1995 to December 1998, he worked as chief counsel for the Senate Committee on Rules and Administration and co-drafted the initial Senate resolution for the impeachment proceedings against President Bill Clinton.

Posted by alongthemalecon at 2:10:00 PM No comments:

The Associated Press today reported on a Vietnam veteran's efforts to regain federal benefits that were cut off after he wound up living in Cuba.
I wrote about the case of Otto Macias on Jan. 13. Here is the top of the Associated Press story by Michael Weissenstein:


HAVANA — Otto Macias was 19 when he left Cuba in the throes of a socialist revolution, enlisted in the U.S. Army and went to fight communists as a machine-gunner in Vietnam.

He returned from battle in 1969 — broken and suffering from post-traumatic stress and schizophrenia, his family says. After years of hospitalization in New York, Macias, then a U.S. citizen, was well enough in 1980 to fly to Cuba to visit relatives he hadn't seen in decades. He never returned.

As he stayed with family in Havana, Macias' hallucinations became so bad he required hospitalization and constant care from doctors or loved ones, his relatives say. Less than a year later, the U.S. Department of Veterans Affairs cut off his monthly pension of $60 — a large sum for Cuba, where salaries today average about $25 a month. The U.S. agency never explained the cutoff, but the family's American lawyer says he's certain it was because of the United States' trade embargo on Cuba.

Read more »
Posted by alongthemalecon at 7:23:00 PM No comments:

The Broadcasting Board of Governors's proposed 2017 budget calls for creation of a new, non-governmental organization that would carry out the functions of the Office of Cuba Broadcasting.
The budget highlights state:


Spanish Language Grantee for Cuba: BBG requests authority to establish a new Spanish language, non-Federal media organization that would receive a BBG grant and perform the functions of the current Office of Cuba Broadcasting.

The BBG requests a total of $777.8 million for fiscal 2017. That also includes $2 million in research funds to finance "impact studies to engage next-generation influencers who use mobile, social and digital media in areas experiencing violent extremism, to assist in developing audience loyalty and trust for BBG’s expanding Russian media, and to increase the impact of digital media in Cuba and Latin America."