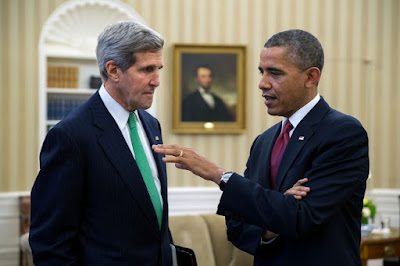 The State Department on Friday blamed "scheduling issues" for the cancellation of John Kerry's previously announced visit to Cuba and says the secretary will travel to the island with Barack Obama later this month.
Earlier news reports had said Kerry had decided not to travel to Cuba in advance of the president because Cuban officials were supposedly refusing to allow him to meet with Cuban dissidents.
See below for transcript of today's briefing with State Department spokesman John Kirby:

MR KIRBY: Hey, everybody. Happy Friday to you. Got a couple things at the top then we’ll get on going there.

First, a call readout: This morning, Secretary Kerry spoke by phone with Cuban Foreign Minister Bruno Rodriguez about President Obama’s upcoming trip to Cuba. Both ministers reiterated their commitment to making the visit a success and to ensuring that the path to normalization continues in the positive direction that it’s already taken. The Secretary told the foreign minister that the President is very much looking forward to the trip and to meeting with a wide array of Cuban officials and citizens to include members of civil society. Secretary Kerry expressed his own disappointment, of course, that scheduling issues prevented him from making a trip ahead – a trip to Cuba ahead of the President, but that he expects to be accompanying President Obama on this very historic occasion.


Also today, the UN Security – I’m sorry, let me try that again – today, UN Secretary-General Ban Ki-moon released a disturbing report detailing instances of sexual exploitation and abuse in the UN system, including by UN peacekeepers. While we welcome the secretary’s – the secretary-general’s attention to this very serious problem, our first read – and I would iterate that this is just a first read; we’ve only just started going through this report – would reveal two clear realities: First, these outrageous incidents are persistent and widespread, and they demand immediate and effective action. Secondly, although the secretary-general has taken several important steps towards transparency and accountability for these crimes – and we applaud that effort – much more needs to be done by the leadership at all levels of the United Nations, as well as by troop and police-contributing countries.

To state it simply and bluntly, exploiting or abusing the very vulnerable people that the UN is supposed to be actually protecting and helping is absolutely inexcusable. It also undermines the credibility of peacekeepers and the utility of the peacekeeping missions that they’re performing themselves. As we study this important report – and as I said, we’re still working our way through it – we’re going to be following up with the secretary-general and the UN as well as troop and police-contributing nations about next steps to better address this problem.

With that, we’ll start. Pam.

QUESTION: Can we go back to Cuba? When the Secretary was on the Hill last month meeting with lawmakers and he referenced the possibly – the trip ahead of Obama possibly to meet with Cuban officials, saying that human rights issues would be a focal point, is there a dispute between the U.S. and Cuba on how to address human rights issues? And if so, is – did that play a role in the Secretary not being able to make a trip prior to Obama’s visit?

MR KIRBY: Well, the Secretary said he expects to go to Cuba in the very near future, and he is going to do that. He’s going to – he’s chosen to go with President Obama. So he’s still going to Cuba but he’s going with President Obama. There were a number of factors that precluded him from being able to go any sooner – scheduling issues, not the least of which was the heavy demand that the visit would have taken on the embassy staff down there. To do two high-level visits in a given month, that was a lot to ask them.

On human rights, there’s no question that we continue to have concerns about the human rights issue in Cuba, and we’ve been very candid and frank about that, publicly and privately. There still remains concerns that we have about it. And as I think you heard my colleagues at the White House talk about it a little earlier, the President has every expectation to meet with dissidents down there in Cuba, dissidents that they themselves have – will and choose to meet with.

QUESTION: -- is it any particular area of human rights or is it just the dissidents or prisoners, treatment of prisoners, or all of the above?

MR KIRBY: I think there’s a full scope of issues. I mean, it’s the way in which political dissent is not tolerated and the speed with which and the groundless nature with which people are arrested and detained in Cuba. I mean, there’s a whole range of issues there. And again, Said, we’ve been very open and honest about our concerns. And look, you can go on our website and read our Human Rights Report and see it right there in black and white what our concerns are. And those concerns remain valid.

But it doesn’t mean that we’re not going to continue to work towards normalization or that we’re not going to try, as I said in my opening statement, to keep that process on the positive path that it’s already begun to take. There are issues where we don’t see eye-to-eye, and I suspect that some of those issues will remain for a while going forward. But we continue to believe that opening up the relationship with Cuba, that normalizing a relationship through appropriate foreign relations, is a better way to have a discussion with everybody in Cuban society. And if you want to make a difference, we believe the way to make that difference is through dialogue and talking and conversation and interaction. And that’s what we’re going to continue to pursue.

QUESTION: Thank you.
Posted by alongthemalecon at 6:02:00 PM

Thanks for sharing this information. Your blog is good and I have bookmarked it as well.


SevaHome is the online site to buy scented candles and to buy premium candles in India. We have christmas collection, metal collection , Glass collection and marble collection. You can Seva Gift Sets from our website as well.